Terrence Shannon Jr. shoots No. 19 Illinois to win over No. 8 UCLA 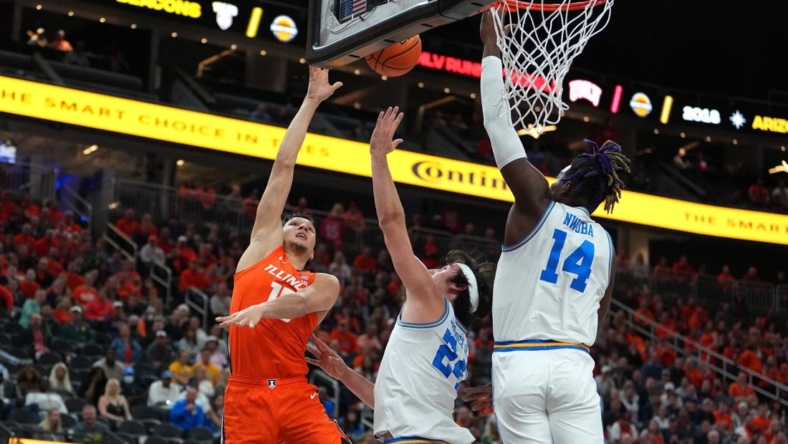 Terrence Shannon Jr. scored 29 points and was a career-best 8-for-9 from 3-point range to lead No. 19 Illinois to a 79-70 victory over No. 8 UCLA on Friday night in the Continental Tire Main Event at Las Vegas.

Illinois trailed 44-29 early in the second half, but Shannon made two 3-pointers during a 12-2 run to pull the Illini within five with 14:46 left.

Dainja’s three-point play moved Illinois within 52-51 with 9:49 remaining, and Clark’s reverse layup 39 seconds later gave the Illini their first lead of the second half. Sencire Harris added a fastbreak layup and Shannon drained a 3-pointer to end a 10-0 burst that gave Illinois a 58-52 lead with 8:02 left.

Shannon’s 3-pointer gave Illinois a 28-27 edge with 2:42 left before UCLA scored the next 14 points, including 10 to end the half. Jaquez’s basket with three seconds left gave the Bruins the nine-point halftime advantage.

Jaquez and Jaylen Clark opened the second half with baskets to conclude the spurt. A short time later, Jaquez connected from 3-point range to increase the lead to 15 with 17:53 remaining.