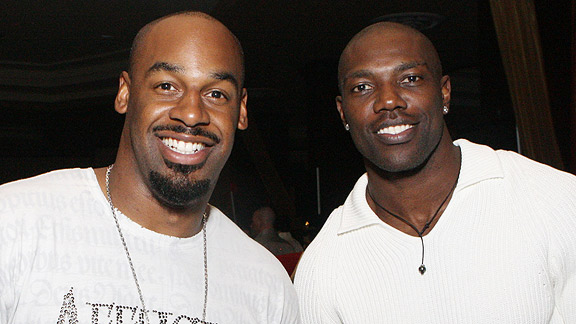 Former NFL quarterback Donovan McNabb was arrested for the second time in two years for a DUI stemming from a June 28th incident in Arizona. Thankfully, McNabb didn’t injure anyone in the car he rear-ended.

Worried about about his ex-teammate, former NFL wide receiver Terrell Owens had this to report about Donovan’s latest arrest (via TMZ Sports):

“DUI is a very serious thing. The number of lives that have been lost from it are staggering. It’s a blessing no one was hurt. We may not still be playing, but we still serve as role models. You have to be more responsible. Next time, call Uber.”

Here are the details of McNabb’s arrest:

“On 06/28/2015 at approximately 2335 hours, officers responded to a non-injury collision involving two vehicles which occurred just west of the intersection at E Chandler Heights Rd and S Higley Rd in Gilbert, AZ. Subsequent investigation revealed Donovan McNabb (11/25/76) was impaired by alcohol and collided in a rear-end fashion with another vehicle which was stopped at a red traffic signal. Donovan was arrested for DUI at 2358 hours and transported to the Gilbert/Chandler Unified Holding Facility for processing, after which, he was cited and released.”

With all of the available driving services out there these days, there is absolutely no excuse to drive while intoxicated.

We’re pretty sure the former quarterback has a enough money to shell out a few bucks to invest in Uber or a similar service.

Of course, that might have to wait until he serves what could be a lengthy jail sentence.