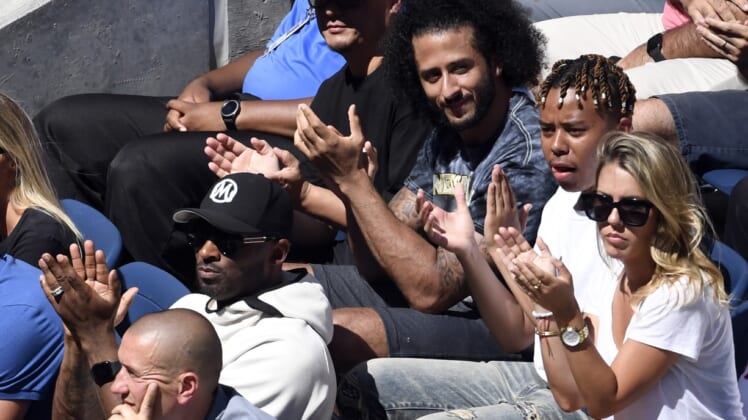 NFL Hall of Fame receiver Terrell Owens wants to see Colin Kaepernick back in the NFL, and he’s not just talking about it, either.

TMZ reported Thursday morning that Owens will be leading a “march and kneel” rally. It’s being co-engineered by Kappa Alpha Psi — the fraternity that Kaepernick joined while he was a student-athlete at University of Nevada, Reno.

Per the report, Owens has “hopes of putting pressure on NFL teams to sign Colin to a roster for the 2020 season.”

NFL has blackballed Colin Kaepernick since early 2017 over protests

Kaepernick started protesting police brutality against African-Americans in 2016. He started by sitting on the bench, then spoke with former Green Beret Nate Boyer, who suggested he kneel instead so as to not disrespect the flag. Other players joined Kaepernick in the protests, sparking a strong retort from President Donald Trump.

Following the 2016 season, which was an injury-shortened one for Kaepernick, the San Francisco 49ers agreed to part ways with the quarterback. He hasn’t sniffed an NFL job since.

Last year, the league set up a workout for Kaepernick. It was ultimately seen by many as nothing more than a publicity stunt after a kerfuffle about the location led to a battle of words between Kaepernick and the NFL.

However, one thing was clear then, and remains clear now — Kaepernick is ready to play.

The NFL has changed its tune and now says it supports players and the Black Lives Matter movement. Roger Goodell recently shared a video in which he apologized that the league got it wrong before. Nobody really knows what this means for the future, because now the league’s owners have to walk the walk.

However, it has been reported that Kaepernick’s return to the NFL has more hope now than it has in the past few years.