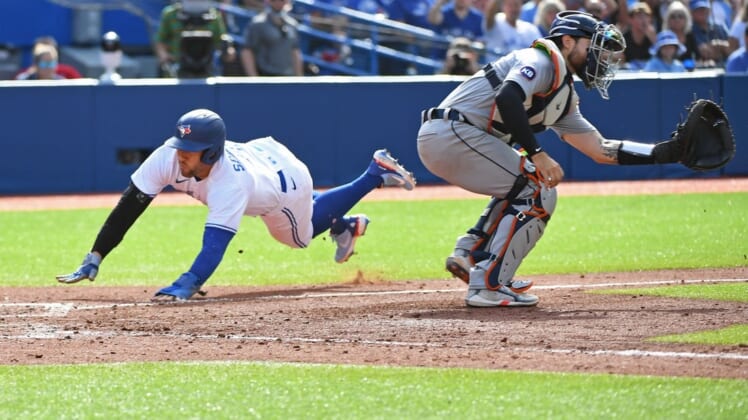 Teoscar Hernandez hit a three-run homer in the sixth inning to fuel the host Toronto Blue Jays to a 5-3 win over the Detroit Tigers on Saturday afternoon.

Despite being outhit 10-4 on Saturday, the Blue Jays have won two of the first three contests of their four-game series.

Vladimir Guerrero Jr. extended his hit streak to 11 games with a single in the first inning. He then stole his second base of the season and scored on a single by Lourdes Gurriel Jr.

Stripling pitched around two leadoff singles in the fourth with a double-play grounder.

The Tigers again started the fifth with two singles, this time by Eric Haase and Robbie Grossman. Detroit won a challenge and Jonathan Schoop was ruled to have been hit by a pitch to load the bases.

Kody Clemens hit a sacrifice fly and Adam Cimber replaced Stripling. Riley Greene hit an RBI double to give Detroit a 2-1 lead, however Schoop was thrown out trying to score on Cimber’s errant pickoff throw to third.

Jeimer Candelario was hit by a pitch with one out in the sixth and Haase singled. Schoop hit a two-out RBI single and Trevor Richards (3-1) replaced Cimber.

Derek Law (0-1) allowed Santiago Espinal’s leadoff single in the bottom of the sixth before George Springer’s grounder forced Espinal at second. Guerrero was hit by a pitch and the bases were loaded on Law’s error on Gurriel’s comebacker. Bo Bichette hit a sacrifice fly and Hernandez belted his 14th homer of the season to stake Toronto to a 5-3 lead.

Yimi Garcia replaced Richards in the seventh after Reyes’ one-out single. Garcia returned for the eighth and worked around a walk before Jordan Romano pitched the ninth to secure his 23rd save of the season.