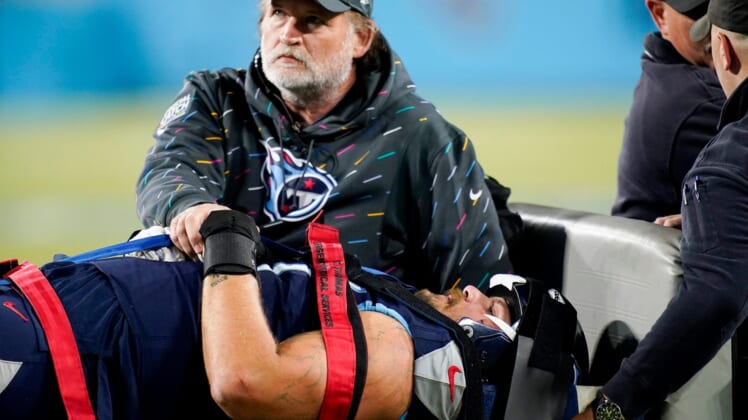 Tennessee Titans offensive tackle Taylor Lewan (77) is taken off the field after was injured at Nissan Stadium Monday, Oct. 18, 2021 in Nashville, Tenn.

Tennessee Titans left tackle Taylor Lewan remained in concussion protocol on Friday and was ruled out for Sunday’s game against the Kansas City Chiefs.

Lewan was injured during Monday night’s 34-31 victory over the Buffalo Bills. He was carted off the field after being hurt.

Kendall Lamm, who finished Monday’s game, is slated to start against the Chiefs.

“I’m just hoping and praying for Taylor, I know he’ll come back when he can,” Lamm told reporters on Friday. “For me, to be completely honest, you realize, yes, football is everything but health is first and foremost.”

Lamm joined the Titans this season and will be making his first start for the team. He has made 27 previous starts (of 80 games played) while playing for the Houston Texans (2015-18) and Cleveland Browns (2019-20).

Receiver Julio Jones (hamstring) is one of four Titans listed as questionable. The others are outside linebacker Bud Dupree (knee), safety Amani Hooker (groin) and running back Jeremy McNichols (ankle).