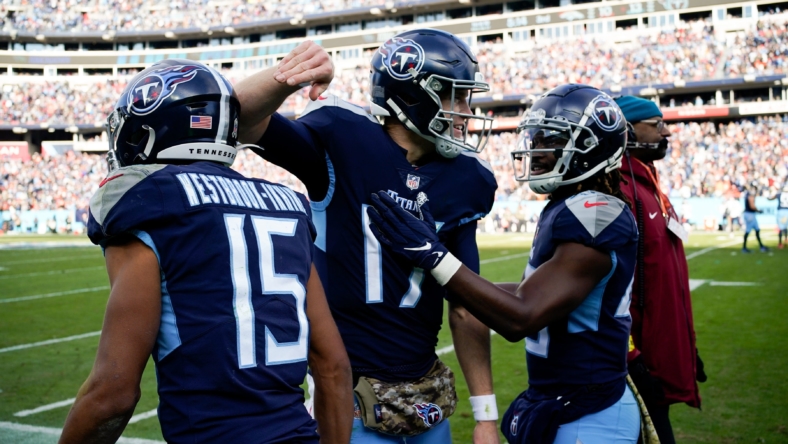 The red-hot Tennessee Titans will open up the NFL Week 11 slate against the Green Bay Packers inside Lambeau Field on Amazon Prime Thursday night.

Tennessee has won six of its past seven after an ugly 0-2 start to the season. Its only loss during this span was a 20-17 overtime defeat at the hands of the Kansas City Chiefs back in Week 9.

As for Aaron Rodgers and the Packers, they snapped a five-game losing streak with an upset home win over the Dallas Cowboys this past Sunday. Coming into a short week, Matt LaFleur and Co. want to keep the momentum going. Below, we look at three bold predictions for this big Week 11 outing.

There was a lot of talk about Tannehill’s future with the Titans after a disastrous playoff performance a season ago. The 34-year-old former Pro Bowler then missed two games to injury earlier this season with rookie Malik Willis taking over.

Tannehill returned to action last week against the Denver Broncos, completing 19-of-36 passes for 255 yards with two touchdowns and zero interceptions. He’s been darn good this season.

On the other hand, Rodgers has struggled more than we’ve seen since his early days as a starter in the NFL. He threw three red-zone interceptions in a Week 9 loss to the Detroit Lions. While Rodgers tossed three touchdowns and zero picks last week, he only attempted 20 passes. Taking on one of the best run defenses in the NFL, Green Bay will be forced to pass the ball in this one. If so, we expect more struggles from the two-time reigning league MVP.

As good as Tennessee’s run defense has been, it can be thrown on. Through nine games, opposing quarterbacks have passed for 2,654 yards with 16 touchdowns and nine interceptions. Depth is also an issue here with former first-round pick Caleb Farley having just recently been placed on injured reserve.

Having started nine games as a rookie, Titans cornerback Roger McCreary has yielded a 73% completion mark and 106.0 QB rating when targeted this season. He, too, can be thrown on.

After struggling to open his rookie season, Watson had himself a coming-out party against the Dallas Cowboys last week. The North Dakota State product caught three touchdowns in Green Bay’s surprising win. We’re going to boldly predict that he puts up another 100-yard game as the small-school product learns the nuances of the professional game.

Tennessee finds itself as mere three-point underdogs in this one. That’s primarily due to the team having to head into Lambeau Field for this late-fall matchup. However, the conditions could end up being favorable to the Titans here.

Primarily, it’s set to be 26 degrees and mostly cloudy at kickoff Thursday evening. Things are set up well for multi-time rushing champion Derrick Henry to do his thing against Green Bay. The Packers rank in the bottom five of the NFL in stopping the run. They are yielding an average of 141 yards on the ground per game. That’s just gross.

Tennessee will want to play ball-control offense in this one. It has the workhorse in Henry (731 rushing yards in the past six games) to do just that. With limited opportunities on offense, this impacts what Rodgers can do on the other side of the ball — leading to an upset Titans win.