Tennessee Titans at Buffalo Bills: 5 players to watch for on ‘Monday Night Football’ 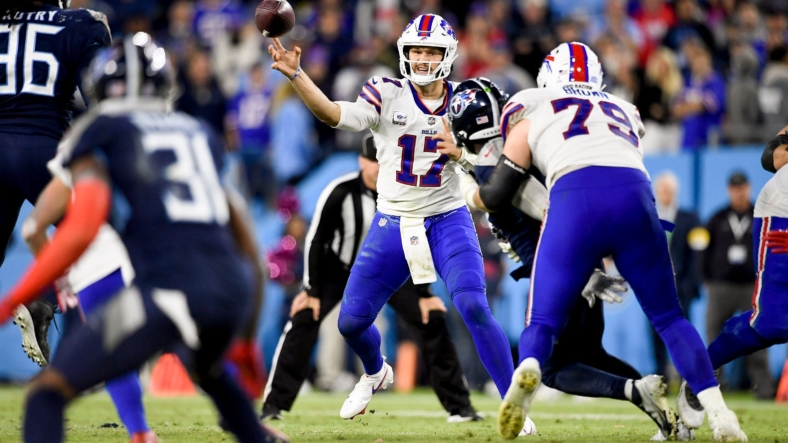 The Tennessee Titans and Buffalo Bills will do battle in one of the two “Monday Night Football” games slated to close up shop on Week 2 of the NFL season.

Josh Allen and the Bills are coming off a brilliant season-opening win over the defending champion Los Angeles Rams, while the Tennessee Titans put up a brutal performance in a Week 1 loss to the New York Giants. Can Ryan Tannehill and Co. get back on track? Below, we look at five players you should pay attention to for this AFC rivalry game.

Related: Find out where the Buffalo Bills and Tennessee Titans stand in Sportsnaut’s NFL power rankings

Singletary ran the ball just eight times in Buffalo’s 31-10 win over Los Angeles in Week 1. In fact, Josh Allen once again led the team in attempts (10) and rushing yards (56). While the quarterback has remained healthy throughout his career, the injury we saw Trey Lance of the San Francisco 49ers suffer on Sunday should be a cautionary tale.

Allen is one of the most-important players in the game. He’s a legitimate NFL MVP candidate. Buffalo simply can’t continue to rely on him lowering his shoulder and creating contact in the run game like we saw so many times in the opener.

If the Bills are going to win their first-ever Super Bowl, they’ll need Allen to be 100% throughout. That means getting more balance on offense. With Zack Moss’ struggles and rookie James Cook’s fumble issues last week, the onus will be on Singletary to provide that balance against Tennessee.

A second-round pick of the Titans back in April, this former Auburn star stood out big time in his regular-season debut against the New York Giants. Despite Tennessee’s ugly loss, he yielded just one catch for five yards on 28 coverage snaps. That’s some pretty big boy stuff right there.

With that said, McCreary isn’t going up against Giants wide receivers in this one. Instead, he’ll be tasked with guarding one of the NFL’s best pass-catchers in that of Stefon Diggs. Last week against Jalen Ramsey and the Rams, Diggs caught eight passes for 122 yards and a touchdown on just nine targets. If Tennessee doesn’t find a way to at least contain the All-Pro performer, it will be a long evening in Western New York.

Gregory Rousseau must continue to show out for the Buffalo Bills

Von Miller dominated in his Bills debut last week, recording three quarterback hits and two sacks against his former team. If Buffalo can somehow get consistent pressure opposite Miller from this 2021 first-round pick, it would create major issues for Ryan Tannehill and the Titans’ passing attack. The Miami (FL) product did just that with two QB hits and a sack of his own.

“Our front four was absolutely just eating. We knew on the back end if we just gave them an extra half second and get Stafford to blink, they were going to get there, so they did a hell of a job. Obviously, the addition of Von just makes that group so much better. Greg, Tim (Settle), Jordan Phillips all those men, they just work extremely hard at their craft, and it makes our job easier on the back end.”

Even with stud cornerback Tre’Davious White sidelined to injury, Buffalo’s secondary has come to play early in the season. Third-year corner Dane Jackson yielded a 19.8 QB rating when Matthew Stafford targeted him last week, including an interception. Continual pressure from the front will lead to some mistakes from a regressed Ryan Tannehill, creating a likely blowout win for the home team.

Related: 2022 NFL defense rankings: See how the Bills and Titans stack up

Ryan Tannehill must turn it around for the Tennessee Titans

Let’s be clear here. The Titans didn’t do Tannehill any favors this past offseason by trading No. 1 receiver A.J. Brown to the Philadelphia Eagles. In no way is this to place all of the blame on general manager Jon Robinson. In short, Tannehill has been a shell of his former self following two consecutive solid seasons to open his Titans career in 2019 and 2020.

Those aren’t terrible numbers. But they also don’t compare to what Tannehill did in his first 31 starts as a member of the Titans (61 TD, 16 INT and a 106.7 QB rating). In order for the Titans to have a chance here, they’ll need to get something more from Tannehill. That’s the reality of the situation.

This NFL MVP candidate is a player to watch around the NFL every week. Despite throwing two interceptions in the season opener, Allen’s all-around performance was absolutely elite. He reminded us of a combination of Patrick Mahomes and Lamar Jackson. In fact, it has been a continuing theme for the former first-round pick over the past few seasons.

Since the start of the 2020 campaign, Allen has accounted for 91 total touchdowns and just 27 interceptions in 34 starts. He’s put up a total of 10,488 yards during that span. Yeah, we’re talking about an average of 309 total yards per game. Buffalo put up 31 points in a huge Week 1 win over the Rams. It’s a game that saw Allen account for all four touchdowns. This comes on the heels of a 2021 campaign in which Allen led Buffalo to an average of 28.4 points per game. He’s as close to must-watch TV as the NFL has to offer right now.