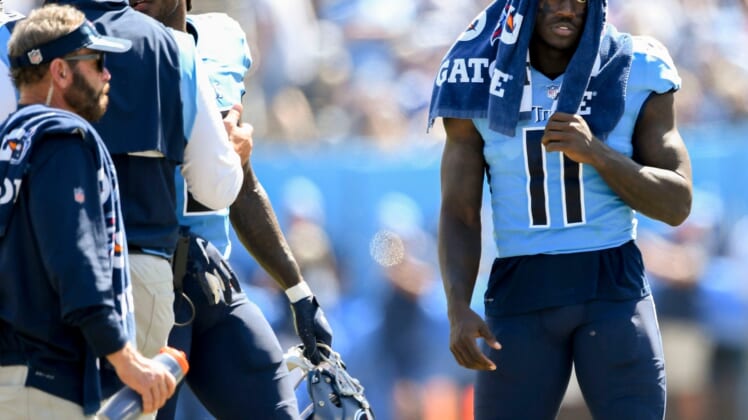 Tennessee Titans wide receiver A.J. Brown (11) on the sidelines during their game against the Colts at Nissan Stadium Sunday, Sept. 26, 2021 in Nashville, Tenn.Titans Colts 153

Tennessee Titans receiver A.J. Brown’s hamstring injury has been diagnosed as a strain and his status is week-to-week, ESPN reported Monday.

Brown injured the hamstring during Sunday’s victory over the Indianapolis Colts.

Titans coach Mike Vrabel told reporters on Monday that he didn’t have a timetable for Brown’s return.

“I am confident that he’ll do his best to get back out there and be the player and the person that we have come to expect,” Vrabel said. “We all go through things throughout the course of a season, it is a long season. We all deal with a lot, and I am confident that everybody, including A.J., will be able to weather some of those storms.”

Brown didn’t catch a pass before exiting after the first-quarter injury and has just seven receptions for 92 yards and one touchdown this season.

Rookie outside linebacker Rashad Weaver sustained a lower-leg injury against the Colts and Vrabel indicated he won’t be back soon. Published reports say Weaver broke his right fibula.

Weaver is a fourth-round draft choice out of Pittsburgh.