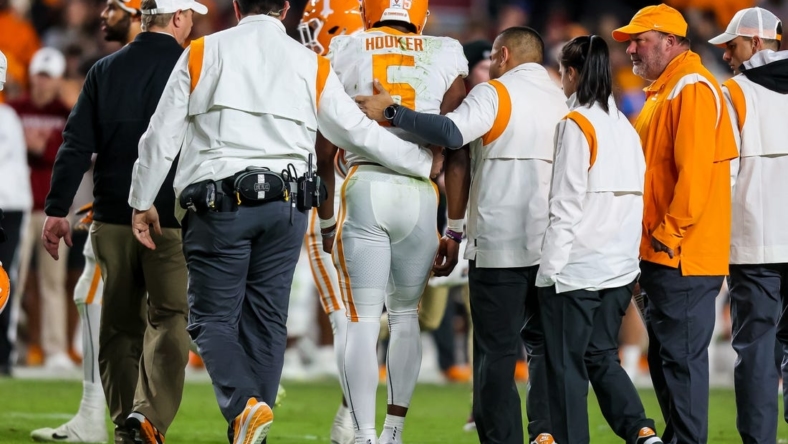 Tennessee announced Sunday evening that quarterback Hendon Hooker tore the ACL in his left knee in Saturday’s loss to South Carolina and was done for the season.

Hooker was a Heisman Trophy hopeful after guiding the Volunteers to major wins in the SEC and the No. 1 spot in the initial College Football Playoff rankings.

The injury marks the end of Hooker’s career, as the former Virginia Tech quarterback was in his final year of collegiate eligibility.

“Hendon’s incredible journey has been defined by faith, perseverance and strength,” Tennessee said in a statement. “Obstacles have never stood in the way on his path to greatness. Forever a Tennessee legend and the ultimate teammate, we know Hendon will come back stronger than ever as he embarks on a promising NFL future.”

In 11 games this season, Hooker has completed 69.6 percent of his passes for a career-high 3,135 yards, 27 touchdowns and only two interceptions. He guided Tennessee to an 8-0 start with wins over LSU and Alabama.

But the Volunteers have lost two of their past three games – 27-13 to No. 1 Georgia and 63-38 on the road Saturday at South Carolina.

Early in the fourth quarter of the Gamecocks blowout, Hooker suffered a non-contact injury to his left leg on a rush attempt. He fumbled on the play and it was recovered by South Carolina’s Jordan Burch.

Joe Milton III is the next man up at quarterback for Tennessee, which was No. 5 in the country last week and is sure to fall in the new CFP rankings Tuesday night.