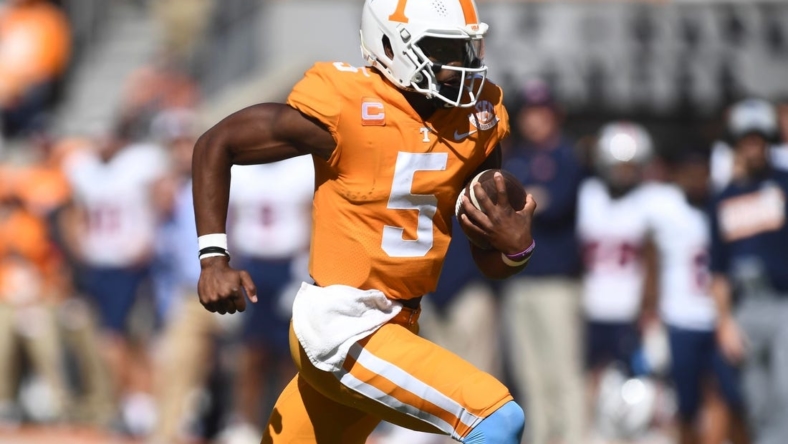 Tennessee earned the No. 1 spot in the first College Football Playoff rankings of the season Tuesday night, followed by Ohio State, Georgia, Clemson and Michigan.

The Volunteers had not been ranked inside the top 15 in the nine-year history of the CFP, but thanks to an 8-0 record with a 52-49 win over Alabama and other strong victories, they topped the initial field with four weeks left in the regular season. CFP chairman Boo Corrigan — the athletic director at N.C. State — specifically cited the Vols’ wins over Alabama and LSU as factors that put them over the top.

Tennessee plays at No. 3 Georgia in an SEC East battle on Saturday. Georgia, the defending national champion, was the No. 1 team in the latest AP Poll, with Tennessee tied for second.

The Buckeyes open the rankings at No. 2 following a 44-31 road victory over No. 15 Penn State. Ohio State has won all eight of its games by at least 11 points.

All top-five teams are 8-0. Prognosticators figured Michigan would be No. 4, but playoff regular Clemson was rewarded with that spot. The Tigers have beaten three other teams in the initial rankings — Wake Forest, N.C. State and Syracuse.

Alabama — 7-1 after a loss to Tennessee — came in at No. 6, ahead of unbeaten TCU at No. 7. Oregon and Southern California gave the Pac-12 some representation at Nos. 8 and 9.

LSU was No. 10, five spots higher than its ranking in this week’s AP Poll. The Tigers are 6-2, with losses to Florida State and Tennessee but recent wins over Florida and Ole Miss, the latter of whom came in at No. 11.

See the full rankings below: