Six teams are on a bye during NFL Week 8. Still, even in an abbreviated week, we don’t have any shortage of under-the-radar players in line for a big week.

Who’s making an impact at the positions we don’t normally pay too much attention to? Who’s emerging into a star? Which veterans — previously thought washed up — are experiencing a career renaissance?

Who are the 10 unheralded players in position to have big games in Week 8 of the NFL season.

There’s a lot to look at with Patterson in Week 8.

As a receiver, he’s becoming more impactful. Over Minnesota’s last two games, Patterson has caught 11 passes for 106 yards and two touchdowns. Nothing monumental, but nothing to ignore, either. On Monday night, he gets a dream assignment against the Chicago Bears’ secondary. Opposing receivers have repeatedly torched Chicago’s defensive backs all year.

Overall, Chicago is yielding the most catches to receivers this season. They are also giving up a 67 percent catch rate to that position through seven weeks.

But what makes Patterson valuable is that he’s an impact player even when contained as a receiver. He’s been a special teams wizard all year.

The Vikings don’t have a particularly strong offensive line and it showed in Week 7 against the Philadelphia Eagles. Against a team like the Bears, the game plan should be fairly conservative. Meaning, Minnesota should play the field position game and let its defense create short fields.

That’s where a special teams stud like Patterson should really shine. 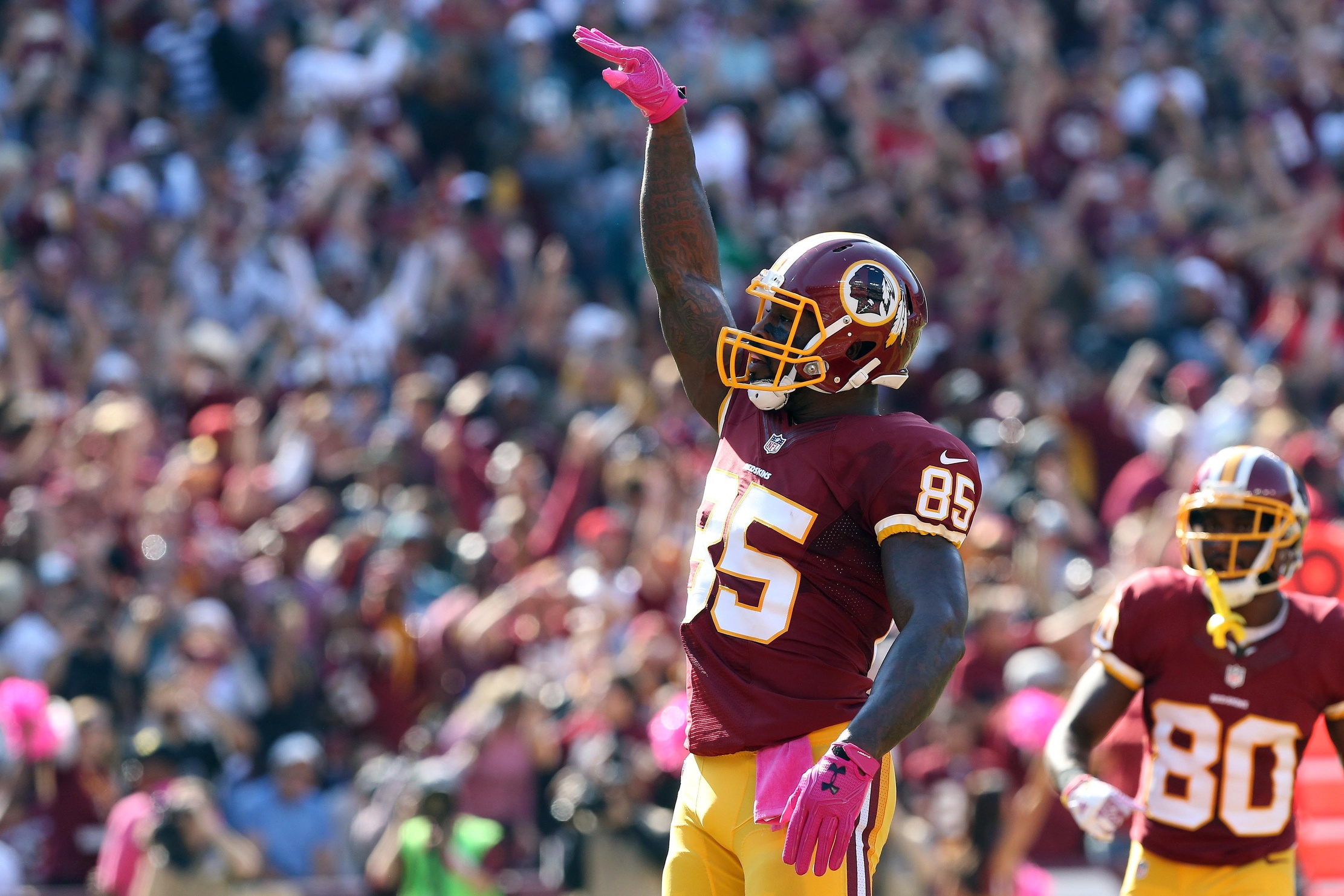 With Jordan Reed out of action in Weeks 6 and 7, Davis showed flashes of his old form. Over the past two games, he’s caught eight passes for 129 yards with a touchdown.

In Week 8, Davis gets a trip to London and a date with the Cincinnati Bengals. Cincinnati has been one of the NFL’s worst teams at defending tight ends in 2016. So, expect Kirk Cousins to look Davis’ way.

Of course, there’s one potential question in Davis’ stock this week. How much playing time will he get if Jordan Reed plays?

First of all, Reed has practiced, but has not yet been cleared to play. Given Reed’s history of concussions, the Redskins should be rather conservative with him.

So, even if Reed does play, can we expect him to play a full game? Logically, it would be better to ease Reed into action in Week 8, let him get better over the Week 9 bye, then get back into full-time action in Week 10. Davis will make a huge impact if Reed does not play. But one way or another, expect Davis’ presence to be felt.

Howard turned in one of his team’s best performances in Week 7’s win over the New Orleans Saints.

In Week 8, he get to go against the Indianapolis Colts. Even in a win over the Tennessee Titans, the Colts allowed Andrew Luck to be hit five times and sacked twice. So, this offensive line is still hazardous to the health of its quarterback.

When Indianapolis gets into passing situations, it will have one of two options.

First off, key on the interior linemen (like Howard) and take their chances with Dee Ford and Tamba Hali on the edge. Secondly, key on the outside rushers and hope that big guys like Howard, Dontari Poe and Chris Jones can’t get in Luck’s face.

Either way, Howard will be a force. If he’s keyed on, he may not have a big statistical day, but he’ll have a big hand in whatever Ford and Hali do. If he’s not keyed on, then he’ll be a constant presence in the face of Luck.

Aside from T.Y. Hilton, nobody on the Colts has been targeted more, caught more passes or had as many receiving yards as Doyle. Doyle and Hilton are also tied for the team lead with four touchdowns.

A smart game plan for the Colts this week would be to use Kansas City’s strong pass rush against the Chiefs.

That means a lot of screen passes and quick routes to the tight end. The Kansas City secondary has struggled at times this year. When Luck does get to release the ball on Sunday, his intended receiver will have a good chance to do something with it. Also, at 6-foot-6, Doyle is a perfect option for Luck inside the red zone when the field shrinks.

He’s been one of the NFL’s best tight ends this season. We should expect that to continue in Week 8. 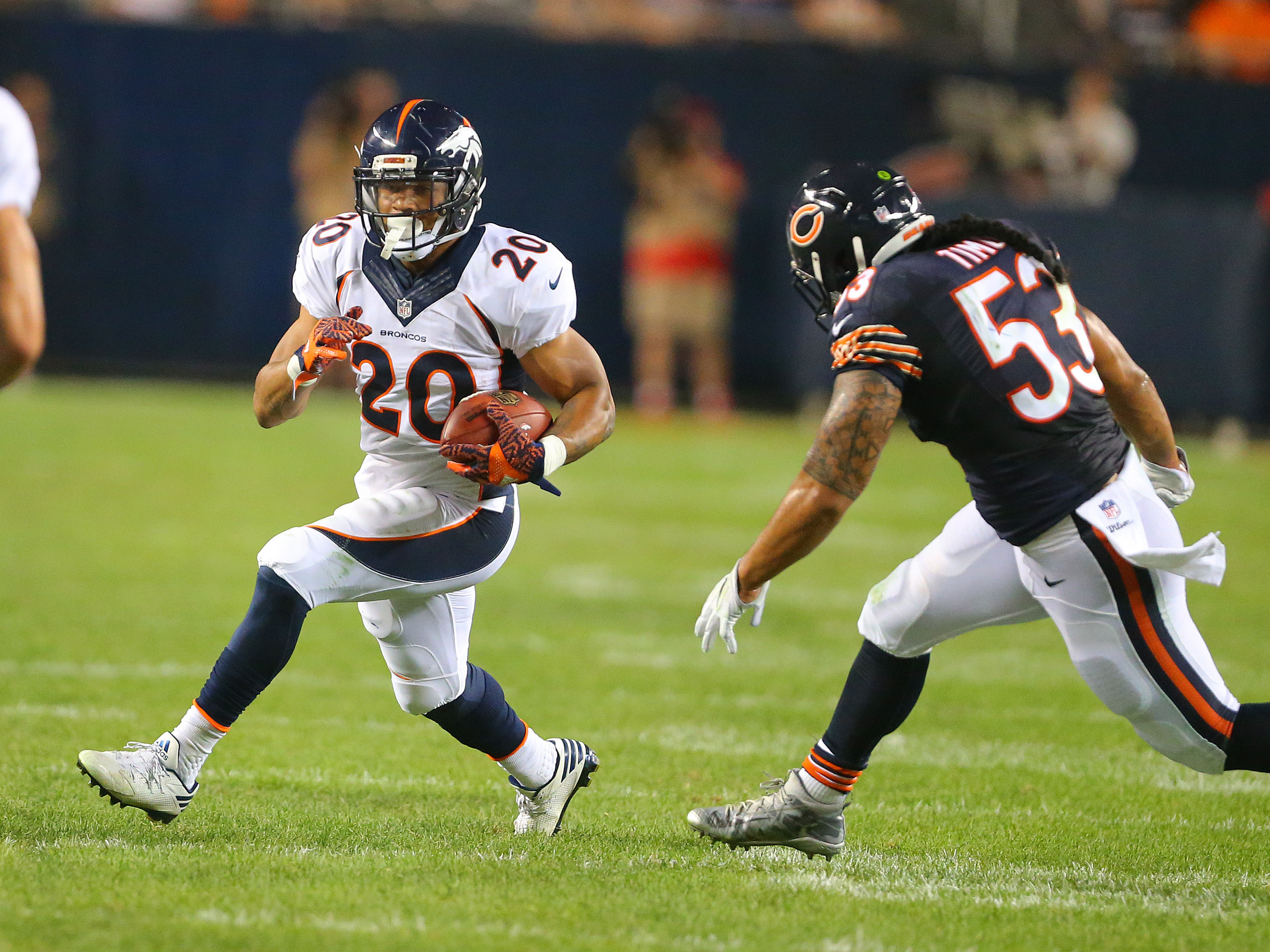 Signs pointed towards Booker having a good week even before the injury to C.J. Anderson. Anderson’s injury only increases the role of Booker.

We can’t get into the mind of Gary Kubiak, or the rest of Denver’s coaches. Still, facts are facts.

When the Broncos and Chargers met in Week 6, Trevor Siemian passed the ball a season-high 50 times. Denver not only lost, but put up its lowest point total of the season.

Translation: Against the same opponent, a different plan of attack would be a good idea. In this case, that means running the ball.

Booker became a big part of the Denver offense in Week 7, carrying the ball 17 times for 83 yards with a touchdown. Granted, San Diego has a better run defense than the Texans, but that didn’t really stop Booker in Week 6. In the Broncos’ defeat at the hands of the Chargers, Booker carried the ball only five times, but went for 46 yards.

Booker and Anderson would have made for a formidable one-two punch this week. But without Anderson in the lineup to take carries, Booker will be Denver’s featured back. Being the Broncos’ featured back points to a big game in a week when the Denver rushing attack should be prominently featured.

The fifth-round pick can definitely do something to contain Booker on Sunday. Brown is on pace for over 100 tackles in his rookie year and will certainly see a lot of Denver’s running back on Sunday.

But Brown can also make his impact on this game as a pass rusher.

Despite playing a non-traditional pass rush position, Brown has recorded three sacks this season, including two in his last three weeks.

Even if the Broncos focus more on running, they’re going to have to pass the ball on occasion. Siemian has not done terribly well under pressure this year, and Denver’s offensive line has not kept the pocket clean in front of him. San Diego can exploit those problems with a heavy blitz. That’s where Brown can make his impact felt.

If he can get home against Siemian, he’ll create even more passing situations for Denver. Even if Siemian manages to avoid the sacks, he’ll be throwing the ball sooner than he likes, and under pressure. If those passes sail out of bounds, then the blitz creates punts. If not, then it creates turnover chances. Either way, that’s a good thing for the Chargers.

Brown’s impact may not show up in the stat sheet. But against a poor offensive line and a young quarterback, his role figures to be immense.

With Vincent Jackson out, Tampa Bay needs someone to line up as the No. 2 receiver opposite Mike Evans. In a favorable Week 7 assignment against the San Francisco 49ers, Cecil Shorts received the most snaps in that spot.

Unfortunately for Shorts, he did nothing statistically. While he didn’t see as many snaps as Shorts, Shepard got the ball thrown his way a lot and made a big impact.

This week, Tampa gets another favorable assignment against the Raiders. Even when the Raiders win, their secondary struggles to do anything noteworthy against opposing receivers.

Shepard caught five passes for 77 yards against the 49ers. He should have a similar game against Oakland’s secondary.

Of course, the Raiders can keep their defense off of the field by controlling possession with a solid running game. That will place a heavy spotlight on Hudson, as well as

“When you lose a guy who is as crucial to your game plan as Lee Smith, you need to be ready to pivot to a better game plan,” James Arcellana of Cover32 said. “In this scenario, it means continuing to run towards your strength. With Smith gone, that strength is now between the tackles behind (Kelechi) Osemele, Rodney Hudson and Gabe Jackson.”

That certainly is Hudson’s forte. On Sunday, he was one of many Oakland linemen to star.

Center pulls are one of my favorite things. Rodney Hudson with a fantastic job of digging out the LB here. Notice the hip mobility/extension pic.twitter.com/oHWQXekOXa

Hudson and his linemen will get another glorious opportunity this week.

After being used primarily on special teams through his NFL career, Montgomery has found a spot in the Green Bay offense.

He’s caught 10 passes in each of the last two Packers’ games. Going against an Atlanta Falcons secondary that has had its struggles at times, we can assume that Aaron Rodgers will again target Montgomery a great deal on Sunday.

In Week 7, we also saw what Montgomery can do coming out of the backfield. He carried the ball nine times for 60 yards against the Bears. Generally speaking, 6.7 yards per carry will get the job done.

As good as Montgomery may be as a receiver and a running back, his best chance to thrive will come when he combines the two roles.

Atlanta has also struggled mightily defending receivers coming out of the backfield this year. The Packers offense has struggled this year. In a game that figures to feature a lot of offense, Green Bay would do well to exploit the Falcons’ defensive struggles.

With Darius Slay out with an injury in Week 7, the Lions needed someone in the secondary to step up.

Diggs did just that. He was a big part of Detroit’s upset victory over the Washington.

In Week 8, Diggs gets to go against the Houston Texans and their quarterback, Brock Osweiler. That’s been a favorable assignment for opposing defenses in 2016.

As we saw on Monday, Osweiler is not getting any better.

Granted, the Lions defense doesn’t quite stack up to Denver’s, so Osweiler may improve a touch this week. But while they’re not the Broncos, the Lions do have a solid pass rush. Derek Newton being out for the Texans will only improve Detroit’s rush.

Osweiler simply looks frazzled in the pocket. Diggs will only need to lock his man up briefly. If he can do that, he’ll be able to anticipate any rushed throws that Osweiler makes. Many of those may sail over his head onto the sidelines. But if Diggs can be properly selective, an interception may be in his future this week.