May is a complicated month on the MLB calendar. There’s still a lot of baseball to be played — well more than half of the season, in fact. But the stats we see can no longer be chalked up to just a crazy first few weeks. They have to be taken seriously. Granted, there’s still time for struggling MLB stars to turn things around. But it’s time to start making that happen.

So, who are those struggling MLB stars?

Which member of the defending champions needs to get it going? Which free agent prize from the reigning American League champs needs to start showing why he’s worth the big bucks? What New York pitchers need to get their acts together? Which two players involved in a famous brawl need to turn it around?

Which 10 struggling MLB stars are most in need of a quick turnaround?

Note: Unless otherwise noted, the stats listed are accurate through play on Monday, May 15.

Rizzo got off to an icy start to 2017, and it hasn’t gotten much better.

Despite that, we can actually look at a few positives from Chicago’s first baseman.

He’s hit six home runs, putting him on pace for 26. The best power months normally come when the weather is at its hottest, so it’s reasonable to think that that pace will increase. But even if that doesn’t happen, 26 is not alarmingly below 2016’s total of 32.

Rizzo is also making decent contact. His 24 strikeouts put him on pace to strike out 105 times, which would be below last year’s total of 108. In this era, that’s quite a respectable total for a guy who we normally depend on for around 30 home runs.

The problem isn’t his strikeout rate or power. No, the problem comes when Rizzo is making contact with pitches that don’t go over the fence. The ball isn’t leaving his bat with much velocity.

In truth, Rizzo’s start to 2016 has mirrored his team’s start. It hasn’t been a complete disaster, but it’s been quite underwhelming.

There’s a lot of baseball left, but Rizzo and his Cubbies haven’t come close to performing at the best of their abilities. 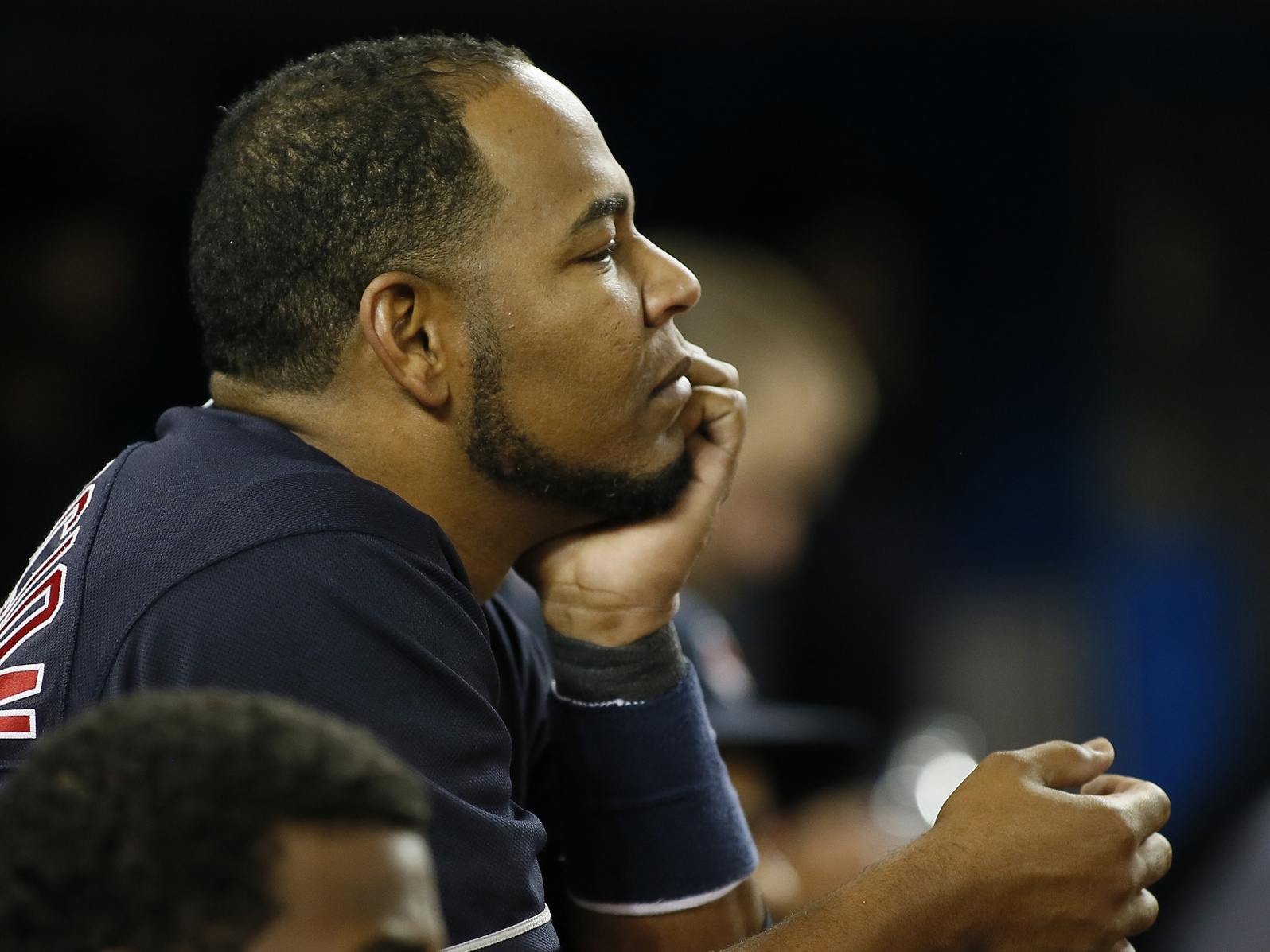 What do Jose Ramirez, Francisco Lindor, Carlos Santana, Lonnie Chisenhall and Michael Brantley have in common? They’re all teammates of Encarnacion in Cleveland and have all driven in more runs than him. We’re aware that the RBI is something of a flawed stat when it comes to determining how well a player is hitting. But when the Indians signed Encarnacion, they weren’t expecting him to be sixth on the team in runs batted in.

This is a guy who was supposed to have been a missing link. Cleveland was impossibly close to winning the World Series in 2016. Landing a player like Encarnacion was seen as the upgrade that the Indians needed. Thus far, that has not happened.

It leads us to another question. Is there anything to be optimistic about going forward?

That’s the good news. But if he’s going to have a similar turnaround in 2017, Encarnacion can’t waste much more time. 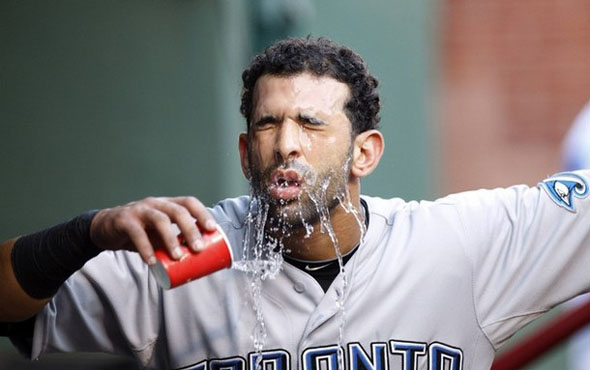 Judging by the numbers, it’s safe to say that Encarnacion misses his former running mate. It’s also safe to assume that the feeling is mutual.

Encarnaion is gone. Troy Tulowitzki and Josh Donaldson have both spent time on the disabled list. So, the external help hasn’t been there in Toronto. But Bautista signed an $18 million deal with the team before the season. It’s time for him to start living up to it.

Really, the contract is why Bautista has to be desperate to turn things around.

In addition to the $18 million in 2017, there’s a mutual $17 million option for the 2018. If Bautista continues on his current pace, the Blue Jays would be absolutely nuts to even consider picking that up. There’s potentially millions of dollars to be lost if Bautista can’t get his season going in the right direction.

Moving from Bautista to Odor is only fitting.

One year ago today, a man named Rougned Odor did this to Jose Bautista. #NeverForget pic.twitter.com/utYlrq4cSt

Unfortunately for Odor, he hasn’t hit much of anything in 2017.

He does have a decent home run total (6) but is slashing at a paltry .197/.252/.362. Even the home run total is slightly deceptive. Odor hit not one, but two home runs on Opening Day and slugged another that week. But since the first week of the season, Odor’s power has been limited, with only three long balls. This is a guy who hit 33 home runs a season ago.

That’s really what we’re worried about.

Odor is still young but has never been a particularly high OBP guy. He entered the 2017 season with a .302 career OBP and was actually below that total in 2016 (.296). Teams can deal with those kind of numbers if they’re getting 33 home runs, especially from a second baseman.

If not? Well, that’s another story.

Wainwright was positively sterling in his most recent outing. He did walk four over seven innings but allowed only four hits and no runs against the Cubs.

Unfortunately, it came on the heels of seven outings that were pretty rough.

The outing against Chicago marked Waino’s only quality start of the season. Only one other time did he go beyond 5.1 innings.

Even when we factor in shutting the Cubs down, Wainwright still has a 5.31 ERA and 1.75 WHIP on the season. He’s allowing far more baserunners than he ever has in the past, with his hits per nine innings (12.1) and walks per nine (3.6) well above his career totals (8.5 and 2.3, respectively).

We’re encouraged by Wainwright’s most recent outing. But we need to see more than one out of eight good starts before we can say that the 35-year-old pitcher has turned it around. 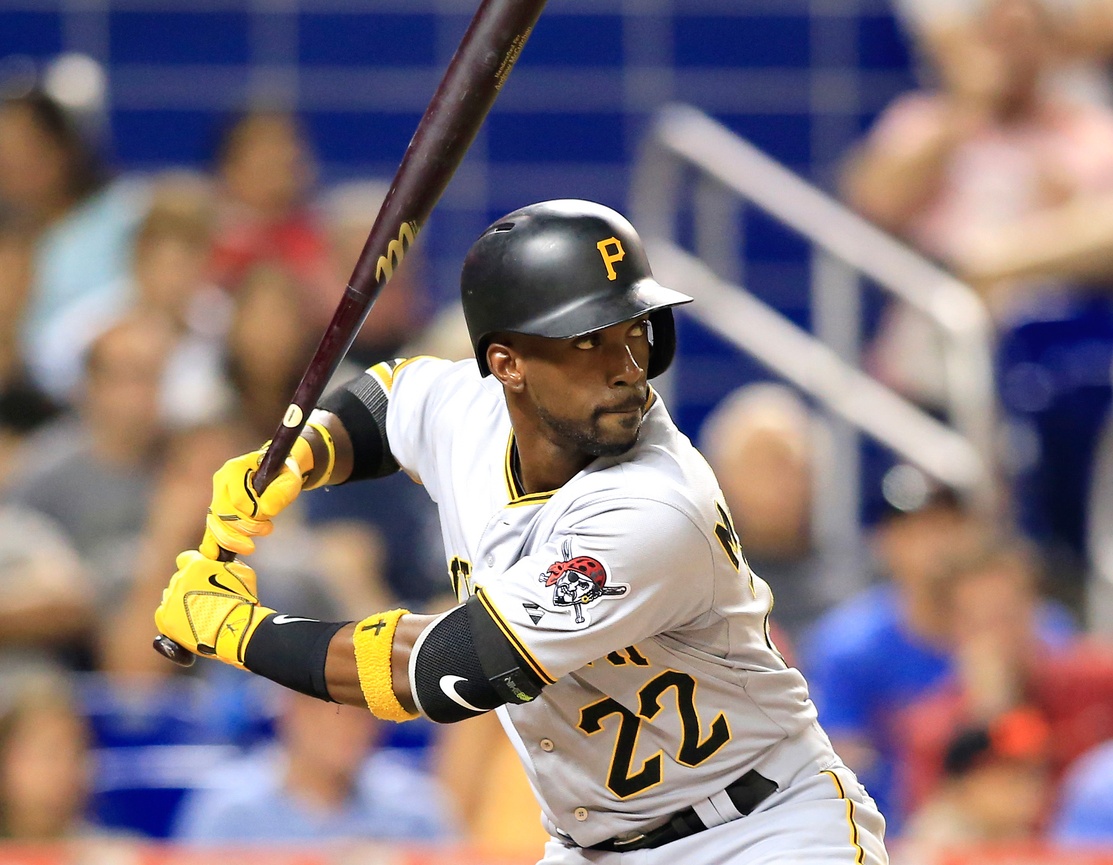 But that was 2016. What do those numbers have to do with 2017? Unfortunately, McCutchen is falling well below the career-low totals that he posted a season ago.

With three steals, he’ll probably top 2016’s total. And while we’d like to see more than six home runs, it’s not a terrible total. But there is no way to positively spin a .212/.288/.401 slash line. Those are the kind of numbers we expect to see from a weak-hitting No. 8 hitter. From McCutchen, they’re almost unfathomable.

Like Bautista, McCutchen has rather serious financial incentive to turn things around.

The Pirates possess a $14.5 million club option on McCutchen for 2018. As great as he has been in his career, how likely will they be to pick up that option for a 31-year-old outfielder coming off of the worst two seasons of his career? And if Pittsburgh doesn’t pick that option up, how likely would McCutchen be to get a better deal on the open market?

Time to hustle up a quick turnaround.

The good news for the Rockies is that they’re in first place in the National League West. The bad news? Colorado has received little help from its star right fielder, especially away from Coors Field.

We expect drastic home/road splits from #Rockies players. But Carlos Gonzalez is taking it to a new extreme. pic.twitter.com/Sib9LwwkIg

Given that Gonzalez has played in 34 of 39 games, those numbers should be much better by now.

He’s not exactly tearing it up at home. But those road stats are almost impossibly low. As a point of reference, Madison Bumgarner has two runs, home runs, and RBI in only five at-bats away from AT&T Park.

What’s worse for Gonzalez is that through the end of June, the Rockies will play only 14 of 43 games at home.

Cargo is someone who needs to be driving the ball. Gonzalez’s power numbers have fluctuated somewhat throughout his career. But with the exception of an injury riddled 2014, he hit 22 or more home runs in every year between 2010 and 2016.

Gonzalez is certainly capable of getting hot. But if Colorado is going to be a playoff contender, a steady bat out of Cargo will be required. Through the early part of 2017, he’s just been consistently bad.

Half of the time he’s toed the rubber for the Yankees, Tanaka has been fine. But in the other half, he’s been anything but.

It's not that the #Yankees have seen no Dr. Jekyll from Tanaka, but they've seed too much Mr. Hyde, as well pic.twitter.com/bBVcC9ua8q

That’s a problem for a few reasons.

It’s hard for any team to win consistently when any of its starters are putting up bad numbers in half of their starts. When the starter in question is the team’s ace, it’s even tougher.

Tanaka has to anchor this group. Joe Girardi has to be able to count on a good start from Tanaka every time he takes the hill. Occasionally, he’ll falter. Humans do that. But he can’t falter as many times as he succeeds if the Yankees have any hope of taking their hot streak deep into the postseason.

New York has performed better than expected through the early portion of 2017. For that to continue, Tanaka needs to become a stabilizing force in the rotation, not its most erratic member. 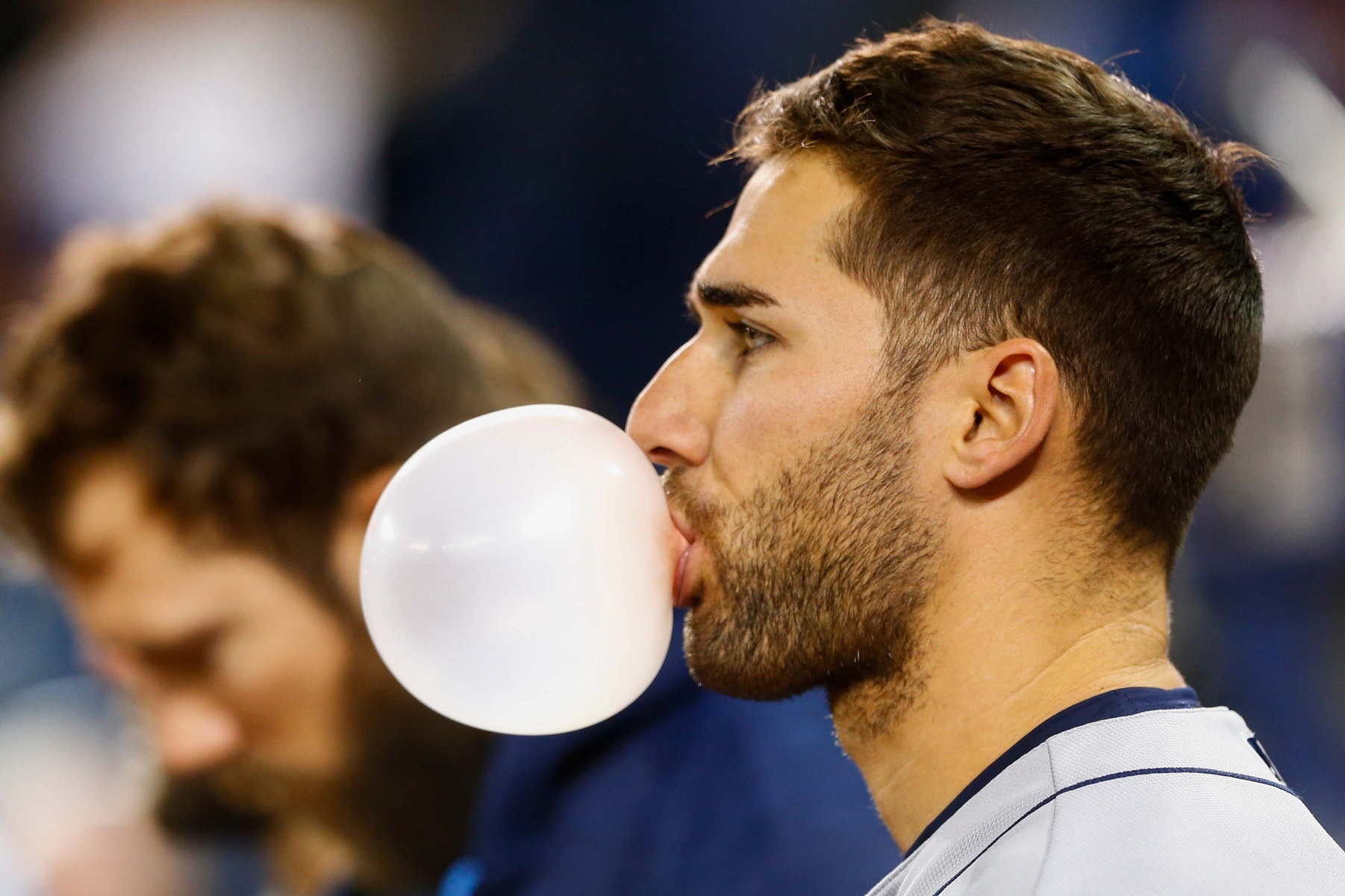 Unlike the other position players on this list, we’re not especially worried about Kiermaier’s bat.

But Gold Glove production in the field is a different story. After all, Kiermaier won the Gold Glove in 2015 and 2016, taking the Platinum Glove as the American League’s best overall fielder in 2015.

Kiermaier hasn’t done that in 2017. He’s already committed four errors. As a frame of reference, he had five throughout all of 2015 and only two in 2016. Two of those errors turned routine singles into Little League home runs, and they came in the same series (you can see them here).

You can live with some of those gaffes in the field from a .300 hitter or 30 home run man. But from a guy with a limited power and mediocre on-base ability, they’re really problematic.

Kiermaier has some room to improve at the plate. But in the field, it’s reasonable for Tampa to expect Gold Glove level production again.

It would be easier to talk about what’s gone right for Harvey in 2017. Unfortunately, that would leave us essentially nothing to talk about.

We can easily focus on the off field drama, looking at Harvey’s three-game suspension and why it came about.

But if Harvey had a sub 3.00 ERA and 1.20 WHIP, that wouldn’t even be relevant. Unfortunately, he’s just not pitching well. Worse than that, it’s a trend that began after the 2015 World Series.

Matt Harvey has almost had 2 different careers, and that's not working well for the #Mets pic.twitter.com/SjlVa6Zo4E

If you’re a Mets fan, there’s not a lot to look at positively over the last few years when it comes to Harvey.

Sure, pitchers’ numbers can be skewed early in the year. When you’ve only made seven starts, two bad ones can really throw things off. But as the numbers plainly show, Harvey’s numbers aren’t being dragged down by a few bad outings. If anything, they may be unduly enhanced by a few good ones.