Temple holds off Rutgers at Hall of Fame Showcase 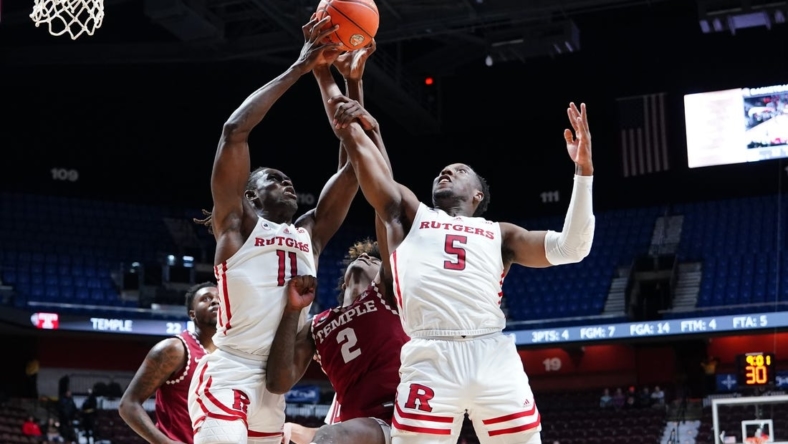 Khalif Battle scored 24 points off the bench Friday, including 13 during a decisive first-half run, as Temple held off Rutgers 72-66 in a Basketball Hall of Fame Showcase game at Uncasville, Conn.

Jamille Reynolds had 17 points and nine rebounds for Temple (2-2), which has alternated losses with wins in its first four games. Hysier Miller scored 12 points and Zach Hicks added 10 points for the Owls.

Clifford Omoruyi had 21 points and 11 rebounds for Rutgers (3-1), which whittled a 19-point deficit to four in the final minute but shot just 38.3 percent from the field and was 1-of-16 (6.3 percent) from 3-point range. Cam Spencer finished with 17 points and a team-high four assists for the Scarlet Knights while Aundre Hyatt added 13 points.

Temple scored the first five points before Rutgers responded with a 6-0 run and took its only lead on Omouryi’s dunk with 17:10 left in the first half. The Owls responded by going on a 33-13 run highlighted by an individual 7-0 spurt by Battle to take their biggest lead at 36-17 on a Hicks 3-pointer with 3:17 remaining before halftime.

Temple led 38-23 at the half and maintained a double-digit lead for the first 10 minutes of the second half before Rutgers went on a 7-0 run capped by Hyatt’s layup to close within 51-45 with 6:57 remaining. The Owls were 0-for-3 with three turnovers during the Scarlet Knights’ surge.

Miller stopped the Rutgers run by hitting a 3-pointer. The Scarlet Knights pulled within 58-51 following a 3-point play by Hyatt with 3:29 left, but Reynolds hit a spinning hook on the next trip down the floor and Battle converted a layup after Reynolds stole the ball from Hyatt.

The Scarlet Knights mounted one more comeback attempt in the final 90 seconds, when they went on an 11-3 run that included a trio of layups by Spencer and was capped when Derek Simpson hit Rutgers’ lone 3-pointer with 12.3 seconds left to cut Temple’s lead to 70-66.

Miller hit a pair of free throws and Spencer and Simpson each missed 3-pointers shortly before the buzzer.