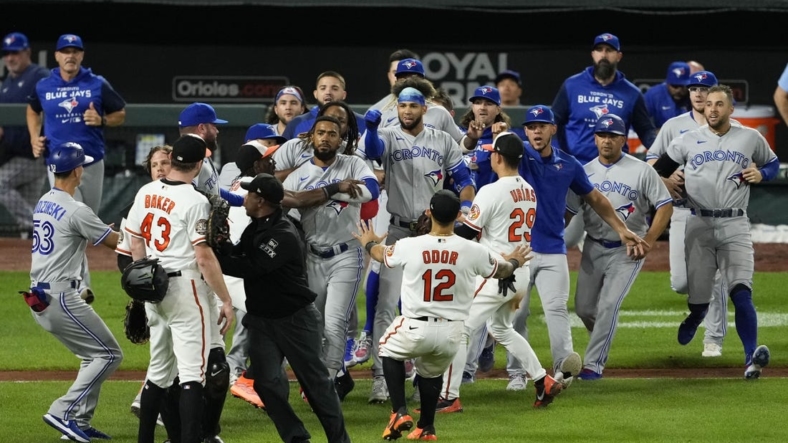 The Toronto Blue Jays and the host Baltimore Orioles sure have each other’s attention as they head into the finale of a four-game series on Wednesday.

Players from both teams stormed onto the field during a dustup Tuesday night, so that could add to the intrigue for the next matchup between teams battling in the American League wild-card race.

The Orioles (72-64) won 9-6 to give themselves a chance at a series split after being swept in a doubleheader on Monday.

The Blue Jays (75-60) had a five-game winning streak snapped, but they maintain a good position in terms of the pursuit for a postseason berth. Toronto sits 3 1/3 games atop Baltimore in the chase for the third and final AL wild card.

The benches-clearing incident came at the end of the top of the seventh inning with the Orioles holding a 6-5 lead. Baltimore reliever Bryan Baker seemed to be the source of the Blue Jays’ displeasure after he stared into the Toronto dugout and gestured that way following an inning-ending strikeout of Matt Chapman.

“I think everybody knows at this point, I’m pretty fired up, pretty intense out there,” Baker said.

Blue Jays right fielder Teoscar Hernandez of the had a different interpretation of the situation.

“Every time he pitches against us, he tries to make a show,” Hernandez said.

It doesn’t sound as if things were soothed over regarding Baker, who broke into the majors with the Blue Jays last September.

“I didn’t understand why Bryan Baker was looking into our dugout after giving up a run on back-to-back days,” said Toronto interim manager John Schneider, who was ejected from the game. “We were just surprised and unsure of why Bryan was looking in our dugout. Again, it wasn’t the first time he’s done that, so I think guys were fed up with it”

Meanwhile, Orioles manager Brandon Hyde said he gave his bullpen a huge workload Tuesday because he sensed the importance of the game. Four relievers shared the last six innings after starter Kyle Bradish failed to record an out in the fourth.

“I was going to do anything I can to try to win the game,” Hyde said.

Dean Kremer (6-4, 3.22 ERA) will be the starting pitcher for the Orioles on Wednesday.

The right-hander has made four consecutive strong outings, going 2-0 with a 2.04 ERA. In that span, he logged 19 strikeouts and four walks in 26 innings. Most recently, Kremer limited the Oakland A’s to two runs on five hits in six innings on Friday.

Kremer is 1-1 with a 7.79 ERA in four career outings against the Blue Jays. The one win came on Aug. 16 when he fired seven innings of two-run ball in Toronto.

Toronto’s starting pitcher on Wednesday will be right-hander Alek Manoah (13-7, 2.48 ERA). He made consecutive August starts against the Orioles, with the Blue Jays losing both of those contests as he was charged with seven runs on 12 hits in 10 2/3 innings.

In Manoah’s rookie season last year, Toronto won two of three games he pitched against the Orioles. Overall, he is 2-1 with a 3.55 ERA six career outings vs. the Blue Jays.