Temper your expectations for rebuilding Bills 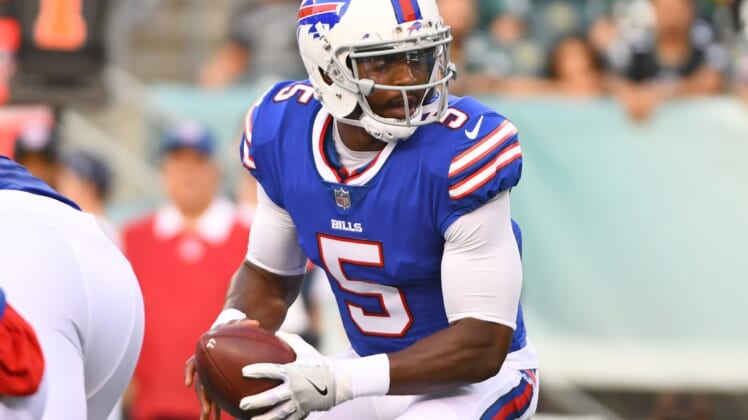 The Buffalo Bills spent the offseason and training camp fumbling all over themselves.

After making strong hires with Brandon Beane and Sean McDermott as general manager and head coach, the Bills ran around like a chicken without a head. They did next to nothing in free agency, with safety Micah Hyde being the only impact signing. Their draft was underwhelming. They shipped out star wideout Sammy Watkins and cornerback Ronald Darby without getting much back. Then they signed Anquan Boldin, who retired within a week.

And all the while, there’s been a bizarre undercurrent of rumors that the team is dissatisfied with quarterback Tyrod Taylor.

Taylor isn’t the best quarterback in football and nobody would mistake him for such. However, he’s somebody you can build around, who can throw deep better than most and can do some things with his legs. Given that the Bills plucked him off the scrap heap, this should be one of the league’s finest success stories. Taylor was top-10 in QBR and accuracy rate last season, per Cian Fahey’s charting. He threw just 10 interceptable passes all year, per Fahey, and ranked 13th among quarterbacks in PFF grading. Maybe he won’t throw for 4,000 yards, but Tyrod Taylor is a good quarterback, and the Bills are treating him like Josh McCown.

It won’t help Taylor’s cause that, post-Watkins trade, he has one of the worst receiving corps in football. Jordan Matthews, who they got back in the Darby trade, figures to be the top receiver. We know this is a bad idea because Matthews was the top receiver in Philadelphia last season and went for just 804 yards on 117 targets. He ranked 76th among wideouts in both DYAR and DVOA.

Second round pick Zay Jones figures to be a solid possession receiver. The East Carolina product didn’t show any big negatives on tape, but didn’t do anything spectacularly either. Jones is a decent route runner with decent hands. He can find holes in a zone, has a decent catch radius and is quick enough. But he doesn’t overwhelm you and didn’t play against many Power Five opponents. Moreover, advanced metrics such as Football Outsiders’ Playmaker Score dislike Jones. The floor may be relatively high, but it’s hard to see the upside with this pick.

Buffalo has next to no depth at the receiver position either, with talent thinning out even at the No. 3 receiver position. Corey Brown had just 27 receptions last season. =Andre Holmes had 14. One of them will be third on the depth chart. Tight end Charles Clay ranked 27th among tight ends in both DYAR and DVOA last season. 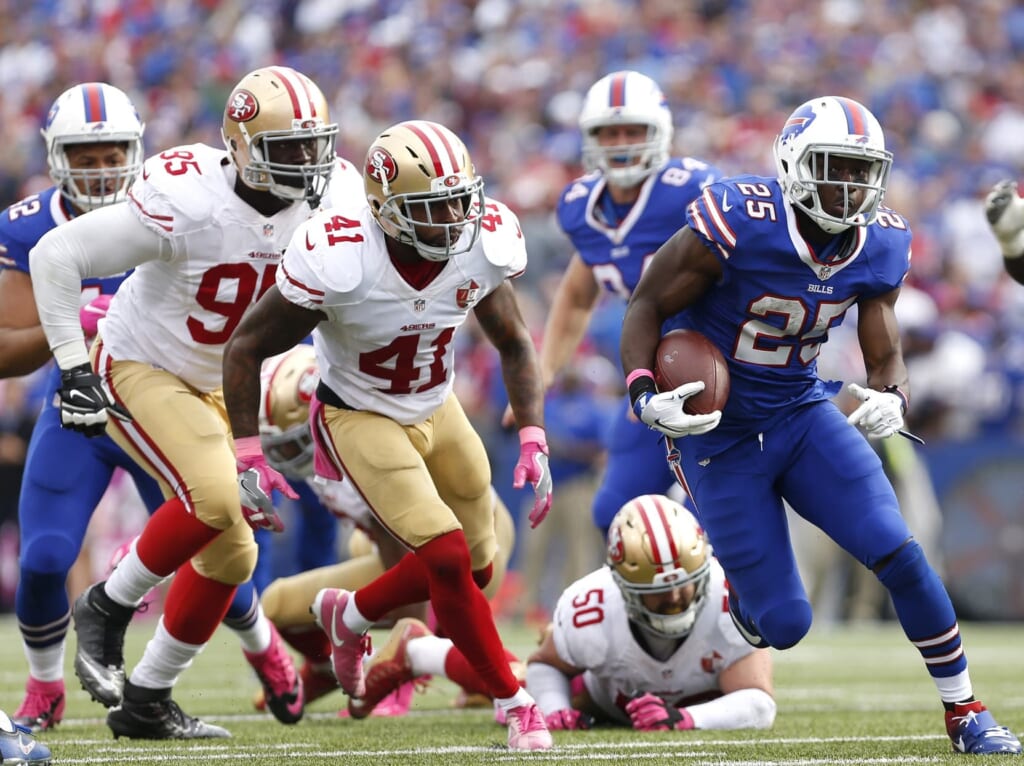 The running game ranked first in DVOA last season and will probably be the best part of this offense again, assuming LeSean McCoy stays healthy. McCoy went for 1,267 yards last season, averaging 5.4 per carry and ranking second among running backs in both DYAR and DVOA. Thing is, there’s no depth behind him. Fullback Patrick DiMarco, who had zero carries last season, will probably be on the field in two-back sets. If McCoy goes down, it will be either Taiwan Jones or Jonathan Williams who takes carries.

Buffalo’s offensive line struggled in pass protection last season, ranking 30th in pressure rate, per FOA. Though solid in the run game, it’s hard to have faith in it this season. This is largely because the group’s best player, left guard Richie Incognito, is 34 years old. Though coming off a Pro Bowl season in which he ranked sixth among guards in PFF grading, it’s hard to see Incognito retaining that level of play. Alongside Incognito on the inside, center Eric Wood played just nine games last season and struggled. He had a 60.8 PFF grade with an abysmal 41.1 mark in pass protection. Right guard John Miller was solid, with a 78.1 grade, but right tackle Jordan Mills was abominably bad. Mills allowed 5.5 sacks and blew 18 blocks last season, per FOA. Don’t be shocked if second rounder Dion Dawkins replaces him at some point. Across from Mills, left tackle Cordy Glenn is dependable, posting an 82.8 PFF grade last season.

Defensively, the Bills were bad last season and, in all likelihood, will be bad this season. After the Darby trade, the secondary is absolutely decimated.

First round pick Tre’Davious White may be the top corner on the depth chart which is not an especially good thing. White played well in press coverage at LSU and has a physical, aggressive, ball-hawk style that could easily see him succeed. However, he was flat-footed when asked to play off coverage and will struggle when receivers hit him with double moves. There are also potential issues against bigger receivers for the 5-foot-11 White, which could amplify if the Bills ask him to cover top wideouts. Alongside him, Shareece Wright, Leonard Johnson and E.J. Gaines will all see playing time. The newly acquired Wright gave up a middling 8.1 adjusted yards per target last season and had a 50.5 PFF grade. Of the three, that was the best. Johnson clocked in at 37.3 and Gaines at 37.0. The latter posted a 36 percent success rate, per FOA, ranking 88th among corners.

In short, this secondary is going to leak like the Trump White House.

Newly acquired safety Micah Hyde is a solid piece, putting up a 72.6 PFF grade last season, but he’s not an All-Pro. Even if he was, there’s only so much one player can do. Next to him, Jordan Poyer played just six games last year and had a terrible 25 percent success rate, per FOA.

The linebacking corps is dotted with question marks. After losing Zach Brown, the Bills will be dependent on Reggie Ragland on the inside. Ragland, a second round pick in 2016, has potential. But he didn’t play in his rookie season due to injury. Next to him, Preston Brown had a 44 percent success rate in coverage, per FOA, as well as a 60 percent run stop rate. On the outside, Jerry Hughes is a decent enough pass rusher. However, his run defense numbers leave a lot to be desired. He ranked 90th among edge rushers with a 61 percent run stop rate, per FOA, and had a 42.2 run defense grade from PFF. Across from him, Lorenzo Alexander is 34 years old. Although he put up solid pass rushing numbers as well — 12.5 sacks, 12 hits and 27 hurries last season, per FOA — decline is going to come sooner rather than later for Alexander. Perhaps 23-year old Shaq Lawson picks up some of the slack, but the 2016 first rounder played only 237 snaps last season. It’s unlikely the Bills use him in anything other than a rotational role. 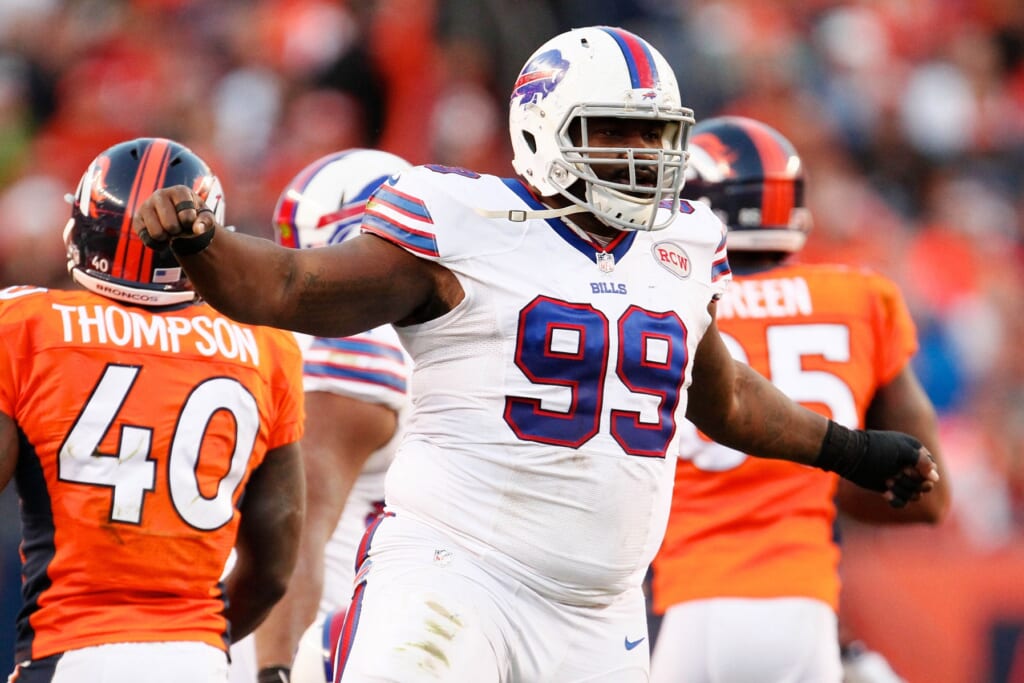 After trading Watkins and Darby for two packages, each including 2018 draft picks, it seems like the Bills are looking to the future. With Taylor under center and McCoy at running back, it’s hard to say Buffalo is tanking. However, the organization certainly looks to be in the early stages of a rebuild.