Securing a first Grand Slam title is supposed to be an arduous undertaking but 19-year-old Iga Swiatek crowned an extraordinary fortnight to win the French Open,,, 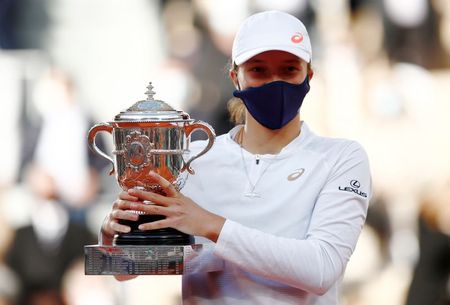 PARIS (Reuters) – Securing a first Grand Slam title is supposed to be an arduous undertaking but 19-year-old Iga Swiatek crowned an extraordinary fortnight to win the French Open in a blaze of winners on Saturday, crushing Sofia Kenin 6-4 6-1.

Swiatek, who had dropped only 23 games en route to the final, produced another audacious display of shot-making to become Poland’s first Grand Slam singles champion.

Only briefly did Swiatek falter, letting slip a 3-0 lead, but having edged a tight opening set she romped to victory.

Not since German great Steffi Graf went through the fortnight dropping only 20 games in 1988 has a woman won the French Open in such commanding style.

Australian Open champion Kenin, herself only 21, needed treatment at 1-2 in the second set and on the resumption Swiatek was utterly ruthless, conceding only three more points, sealing the title with an unstoppable forehand, her 25th winner.

Swiatek, ranked 54th at the start of the tournament but now into the top 20, is the youngest woman to win the French Open since Monica Seles in 1992 and the first to do so without dropping a set during the fortnight since Justine Henin in 2007.

After claiming victory, the former Wimbledon junior champion made her way into the stands to celebrate with her team including father Tomasz, a former Olympic rower, coach Piotr Sierzputowski and sport psychologist Daria Abramowicz.

“I’m overwhelmed. Two years ago I won a junior grand slam and now I’m here. It feels like such a short time,” Swiatek, the lowest-ranked woman to win the French Open since rankings were introduced in 1975, said after returning to court to lift the Suzanne Lenglen trophy.

“It had to be like that, another underdog won a Grand Slam in women’s tennis. It is so often right now that it is crazy.”

She will no longer be an underdog and her rapid rise continues an exciting time for women’s tennis which is blessed with a new brigade including the likes of 2019 U.S. Open champion Bianca Andreescu (20) and Coco Gauff (16).

Kenin belongs on that list but it was a sad end to her tournament as she was unable to find the form that saw her beat Garbine Muguruza to win the Australian Open in February.

She was crestfallen and teary-eyed at the end.

“A few things didn’t go my way in the first set and then my leg wasn’t in the best condition.”

Swiatek began on the shady side of the sparsely-populated Court Philippe Chatrier court with Kenin in bright sunshine, but it was the Pole’s tennis that illuminated the 84-minute final.

She began as freely as if it was a match at her local club in Warsaw, losing three points in opening a 3-0 lead.

Kenin, whose tightly-wound demeanour was a stark contrast to Swiatek’s calm approach, fought back to 3-3 as her backhand began to do some damage.

Swiatek came through a tense service game at 3-3 and in the best passage of play in the final then broke Kenin after another long game in which she saved a game point with a superb drop volley having chased down a drop shot.

She fluffed a set point at 5-3 and Kenin broke with a glorious backhand to trail 5-4 but Swiatek was feasting on the American’s serve and broke again to take the opener.

Swiatek dropped serve at the start of the second set but never looked ruffled and hit back immediately.

Kenin faded rapidly after she had her left thigh heavily taped, but surely Swiatek might tighten as glory beckoned?

No chance. Instead confirmed herself as the sport’s latest sensation by bashing winners for fun. 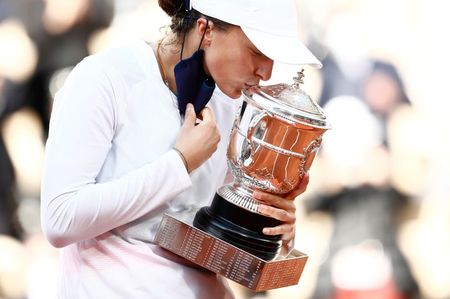 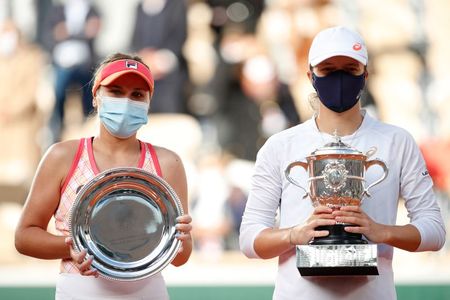 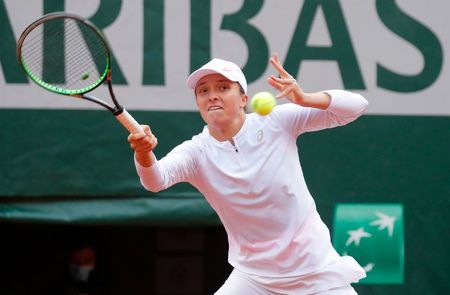 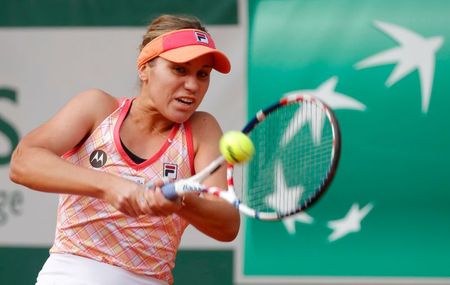