Teddy Bridgewater will get second preseason start for Denver Broncos

The pair are locked in one of the most compelling battles of training camp, with Broncos coach Vic Fangio saying recently that neither has separated from the other.

The Broncos open the preseason against the Minnesota Vikings on Saturday. Game 2 will be at Seattle on Aug. 21.

Lock is a slight favorite to win the job in Week 1, coming in at +100 on DraftKings. Bridgewater sits at +120. 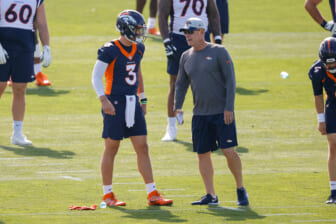 In 18 starts over two seasons, Lock has thrown for 3,953 yards, 23 touchdowns and 18 interceptions with a 59.1 percent completion rate. He missed time in 2020 due to both a shoulder injury and COVID-19 protocols, and the Broncos only won four of his 13 starts.

Bridgewater passed for 3,733 yards, 15 touchdowns and 11 interceptions in 15 games for the Panthers last season. He has started 49 games in his NFL career for three different teams. Denver acquired Bridgewater in an offseason trade with the Panthers in exchange for a 2021 sixth-round draft pick.