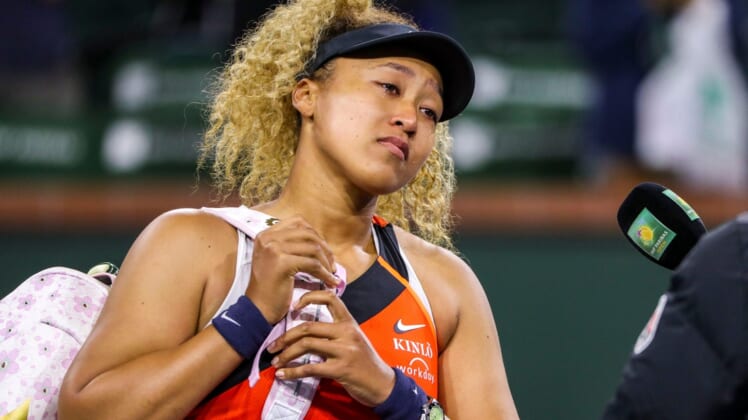 Naomi Osaka of Japan addresses the crowd about being heckled during her match against Veronika Kudermetova of Russia during round two of the BNP Paribas Open at the Indian Wells Tennis Garden in Indian Wells, Calif., Saturday, March 12, 2022.

Former world No. 1 Naomi Osaka was reduced to tears after being heckled by a fan during her second-round loss to Veronika Kudermetova at the BNP Paribas Open on Saturday in Indian Wells, Calif.

A woman was heard to scream, “Naomi, you (stink),” after Kudermetova held serve to claim a 1-0 lead in the first set.

Osaka initially asked the chair umpire if the fan could be kicked out. The four-time Grand Slam champion also was denied in her request to address the crowd during the match, but was granted the opportunity to do so after dropping a 6-0, 6-4 decision.

“Hi,” Osaka said to the crowd. “I just wanted to say thank you. I feel like I cried enough on camera. To be honest, I’ve gotten heckled before and it didn’t really bother me. But heckled here. … I’ve watched a video of Serena and Venus (Williams) getting heckled here and if you’ve never watched it you should watch. I don’t know why but it went into my head and got replayed a lot. I’m trying not to cry but, I just wanted to say thank you and congratulations (Veronika). Thank you.”

In 2001, Venus Williams and her father, Richard, were booed as they took their seats to watch Serena compete in the tournament final. Serena was then booed throughout the match and even after she defeated Kim Clijsters for the title.

Serena did not participate at Indian Wells for the next 14 years.

Osaka, 24, brought mental health to the forefront in 2021 after acknowledging she suffered through anxiety issues and depression.