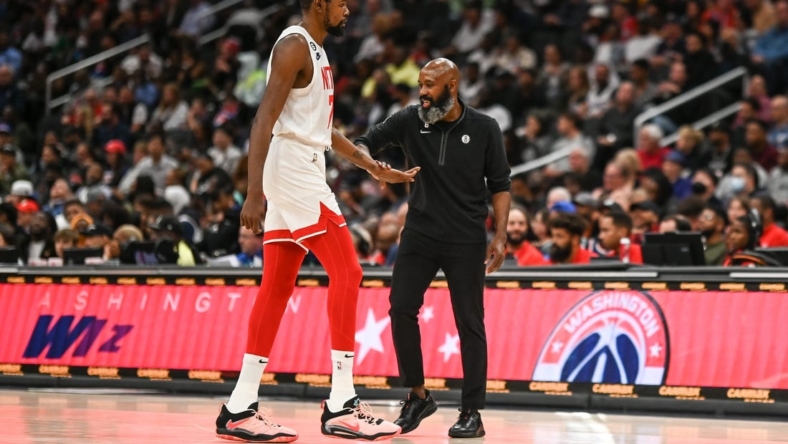 Something good should happen for the Brooklyn Nets or the Charlotte Hornets when they meet Saturday night in Charlotte.

Both teams need that desperately, though the Nets got a taste of something positive Friday night.

Brooklyn experienced on-the-court and off-court troubles throughout the past week, so a 128-86 romp past the host Washington Wizards should help matters.

“That’s how we want to play moving forward,” Nets standout Kevin Durant said after he finished with 28 points while six of his teammates also scored in double figures.

The Hornets have been ravaged by injuries, and they took two blowout road losses this week, including a 130-99 defeat against the Memphis Grizzlies on Friday.

This will be the first meeting of the season between the teams. Both teams had upheaval in terms of player availability, so future clashes might look different in terms of personnel.

But for now, this is where these teams are — and it has been troubling for both teams.

“Guys have to find a way to get ready to play,” Charlotte coach Steve Clifford said. “We’re in a tough part of the schedule. That’s what the NBA is all about.”

The Nets have had such turmoil during the past week that getting away from New York might be a blessing. Guard Kyrie Irving has been suspended for at least five games in the wake of his support for an antisemitic documentary.

The response was encouraging with the Nets winning in Washington in their first game since the suspension.

“We’ve been able to support each other. We showed we were there for each other,” Nets interim coach Jacque Vaughn said. “There’s a mental piece to that, for sure.”

The Nets also played Friday minus injured Ben Simmons, who also will sit out the game in Charlotte due to a sore left knee.

Of course, road games on back-to-back nights are never an easy assignment.

The key, Vaughn said, will be concentrating on winning each game as it comes along amid the distractions for the team. Those have included the firing of coach Steve Nash.

The Hornets have had lots of moving parts as well. Forward Gordon Hayward missed the Friday game because of a shoulder contusion, adding to the injury list.

“I do believe in the group,” Clifford said. “We’ve got to be able to focus on other aspects of the game when the ball isn’t going in the basket. (Saturday night) I’ll be disappointed if it’s not a different-looking team. We have to get past this. It doesn’t matter who’s playing, it’s how we play.”

Charlotte’s LaMelo Ball (ankle) remains out, though Terry Rozier (ankle) and Cody Martin (quad) might be close to being back in action for the Brooklyn game.

“It’s a question of making sure they’re ready,” Clifford said. “We don’t want to go through this again.”

After the Hornets allowed Memphis to shoot 51 percent from the floor, including 16 of 36 (44.4 percent) from 3-point range, Clifford said, “We got outworked, outcompeted. That’s not OK.”

Most concerning to the coach was the Hornets’ deviation from a game plan. He said it’s the players’ responsibility to be on point when it comes to sticking to the plan.

“We got drilled on all the stuff we worked on,” Clifford said, knowing that a younger lineup in the game’s late stages might have been good for development. “They learned. They did some good things and they did other things that they can learn from.”