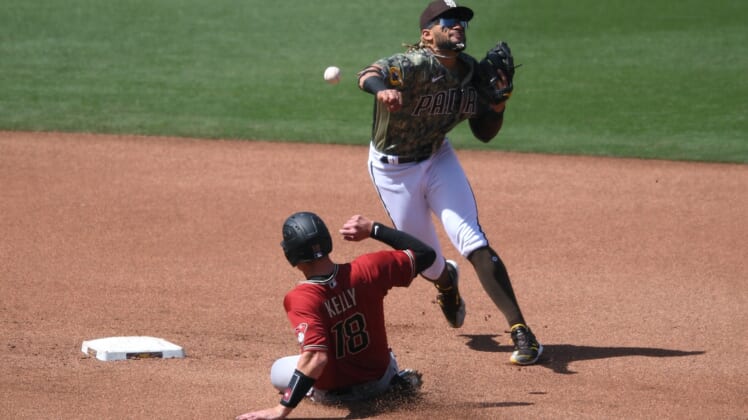 Taylor Widener threw six scoreless innings in his first career start and David Peralta gave Arizona a quick lead with a two-run triple in the first inning Sunday afternoon as the visiting Diamondbacks defeated the Padres 3-1 to salvage a win in the four-game, season-opening series.

Widener and five relievers combined to shut out the Padres on five hits until Fernando Tatis Jr. hit a solo homer with two outs in the ninth. San Diego had scored 19 runs on 29 hits and 18 walks while scoring three straight wins over the Diamondbacks to open the season.

The 26-year-old Widener (1-0) allowed three hits and three walks while striking out five to earn the win. Chris Devenski got his first save since 2018 despite serving up the Tatis homer.

The Diamondbacks scored all the runs they needed in the first. Ketel Marte drew a one-out walk off Padres starter Chris Paddack and moved to second on a single by Christian Walker. Peralta then pulled a grounder that rolled into the right-field corner, scoring Marte and Walker.

The Diamondbacks scored their third run in the third on an error by Padres shortstop Tatis, who had two in the game and already has five errors in four games. Josh Rojas drew a leadoff walk and moved to second on a Marte single, the center fielder’s ninth hit in the series. After Paddack struck out Walker, Peralta grounded sharply to first baseman Eric Hosmer, who got a force on Marte at second. But Tatis’ relay throw to first was wild, allowing Rojas to score.

Widener, who won a spot in the Arizona rotation near the end of spring training after posting a 4.50 ERA in 12 relief appearances in 2020, worked his way out of a jam in the second. Eric Hosmer opened the inning with a double — reaching base for the eighth straight plate appearance – and moved to third on a single by Tommy Pham. But Widener struck out Wil Myers and Luis Campusano. After intentionally walking Jurickson Profar to load the bases, Widener whiffed Paddack to end the inning.

The Padres brought the tying run to the plate in the fifth, seventh and eighth innings but were just 1-for-7 with runners in scoring position.