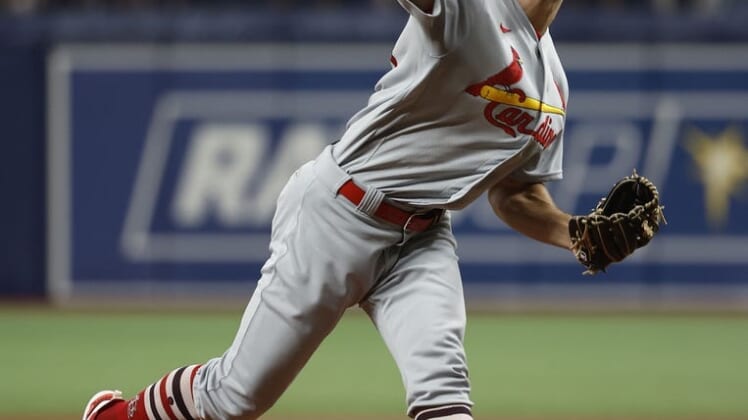 Batting left-handed and down to his last strike, the switch-hitting Walls lashed a sinker from Drew VerHagen (3-1) off the right field foul pole for his third homer and the game-winning blow.

St. Louis used a fielder’s choice and a hit batter against reliever Colin Poche (2-0) in the top of the 10th to fill the bases before Lars Nootbaar’s flyball to right plated Tommy Edman. However, Kevin Kiermaier threw out Paul Goldschmidt at home plate for the third out.

Manuel Margot doubled and scored a run, and Ji-Man Choi doubled as the Rays broke a two-game skid with just three hits — all for extra bases.

In his seventh start since being moved from the bullpen, Jeffrey Springs posted six scoreless innings, allowing six hits and two walks. The left-hander struck out five over a career-high 92 pitches.

Out since March 18 with a right shoulder impingement, struggling outfielder Tyler O’Neill returned to the lineup and went 2-for-5 with three strikeouts. Yadier Molina (double) and Harrison Bader had two hits each.

Albert Pujols recorded his 3,320th career hit with a fourth-inning single, moving him past Paul Molitor and into ninth place in all-time base hits.

Goldschmidt (1-for-4, double, walk) drew a first-inning walk to extend his on-base streak to 43 games.

The Rays improved to 6-3 in extra-inning games and 5-1 against the National League. St. Louis is 4-2 in extra innings and 5-5 in interleague play.

In their first matchup since August of 2017 when the Rays took two of three games at home, neither team could manage any run-producing offense against the opposing pitching through the first six innings against Springs or Hudson.

But in the home half of the seventh, Margot led off with a scorching double — breaking a stretch of 10 straight batters being retired — and scored when Isaac Paredes lifted a long sacrifice fly to left-center.

The Cardinals put two on in the eighth with two outs against Andrew Kittredge, and Bader’s soft single to right scored pinch hitter Nootbaar to make it 1-1.