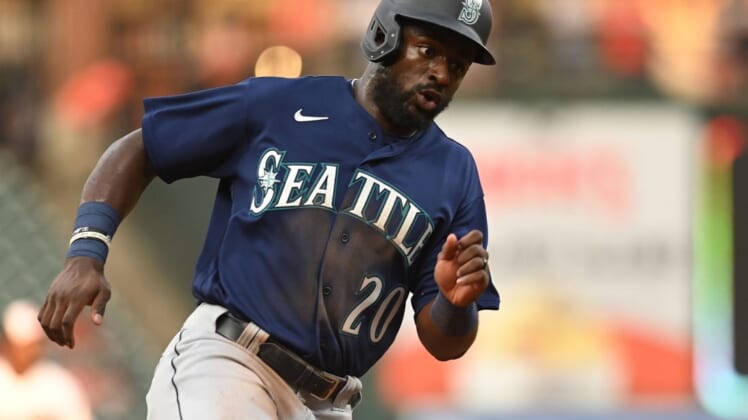 Taylor Trammell had a career-high three hits and four RBIs and rookie George Kirby allowed four hits over six innings to earn his first big league win in the Seattle Mariners’ 10-0 pounding of the host Baltimore Orioles to open a three-game series on Tuesday.

Trammell went 3-for-4 with a run and Cal Raleigh went 1-for-4 with three RBIs and a run, while Ty France and Adam Frazier each had two hits for the Mariners, who scored eight runs in the first three innings.

Dylan Moore went 1-for-3 with three runs and J.P. Crawford was the lone Mariner in the starting lineup who failed to get a hit or score a run.

Seattle took a 1-0 lead in its first at-bat against Orioles right-hander Bryan Baker when Julio Rodriguez’s double scored France, who had drawn a one-out walk.

In his fifth start, Kirby (1-1) had eight strikeouts and a walk on 94 pitches (62 strikes) before being relieved by Matthew Festa in the seventh.

The Mariners pushed their lead to 4-0 in the second. After Frazier doubled to right with one out and Dylan Moore was hit by a pitch, Baker was relieved by Zac Lowther, who didn’t fare any better.

He promptly gave up a double to Trammell to score Frazier, with Moore advancing to third. Raleigh’s sacrifice fly scored Moore before Winker capped the three-run inning with a single to left that plated Trammell.

Seattle turned the game into a blowout with a four-run third.

With the bases loaded and one out, Trammell made it 5-0 with a sacrifice fly before Raleigh’s single scored Frazier and Moore. After an error by third baseman Ramon Urias allowed Jesse Winkler to reach and enabled Raleigh to reach third, France singled to right to score Raleigh for an 8-0 lead.

Seattle pushed the lead to 10-0 with Trammell’s single in the seventh and Trammell’s double in the ninth.

Anthony Santander went 2-for-4 for the Orioles, who struck out a dozen times.