Taylor Fritz to have surgery for torn meniscus

Taylor Fritz will have surgery for a knee injury sustained in Thursday’s second-round loss to Germany’s Dominik Koepfer at the French Open.

According to the 23-year-old American’s Instagram post on Friday, he needs surgery to repair a torn meniscus after hearing “a pop” in his knee on match point in his 6-3, 6-2, 3-6, 6-4 defeat in Paris.

Fritz said he only expects to be sidelined for three weeks and that he hopes to be back in time for the June 28 start of Wimbledon.

“… it’s tough to go out in the 2nd round…even tougher to have to leave the court in a wheelchair,” he wrote, in part.

“On match point when I came down from hitting a forehand, I heard a pop in my knee… When rewatching the videos, everything about my movements looked completely normal but after that pop I couldn’t move and could barely limp myself to the net to shake hands. After sitting down, I wasn’t able to stand up to leave the court. I definitely didn’t want to make a scene by getting wheeled off the court but there wasn’t much else I could do.

“I got it scanned and reviewed, and the bad news is that I tore my meniscus and need surgery. The good news is that the surgery is very quick and easy, and I can make a full recovery quickly if all goes well. I’m hoping to be fully ready to go for @wimbledon.”

Currently ranked No. 33 in the world, Fritz won his lone ATP Tour title at the grass-court Eastbourne Invitational in England in 2019. 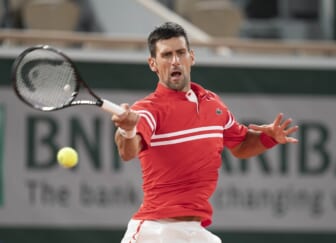