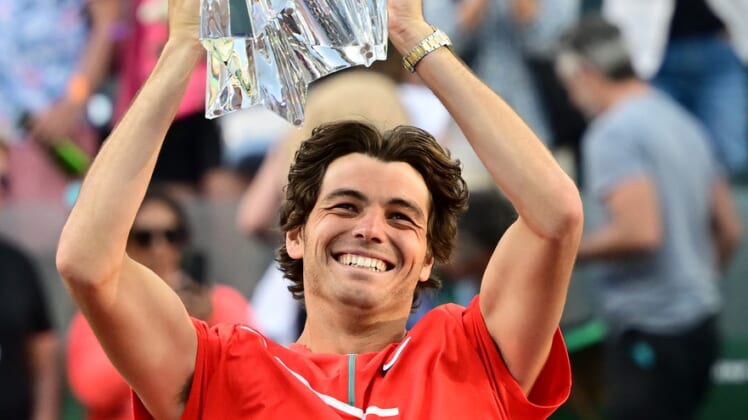 The 24-year-old Fritz is the first American man to win at Indian Wells since Andre Agassi in 2001. It is only his second career victory, the other coming at Eastbourne in 2019.

“Winning this tournament especially, Indian Wells, this is one of those childhood dreams that you just never think can come true,” Fritz said. “I just keep saying, ‘No, no. Just no way it’s real.'”

The native of San Diego was winless in eight matches against the Big Three of the sport — Nadal, Novak Djokovic and Roger Federer — prior to Sunday’s stunning victory.

“I’ve lost these matches against the big guys my whole life,” Fritz said. “It’s always felt like they were just unbeatable. So to do it on the biggest stage, there’s no other way. To win a big title, you’ve got to beat the best. He was unbeaten this year.”

Nadal was laboring during the match and took two medical timeouts — one following the first set and the other while trailing 5-4 in the second.

“I tried my best during the last two weeks,” Nadal said on court following the match. “Today was not possible. I had a good fight to the end.”

Fritz came out fast and won the first four games of the opening set. He led 5-1 before Nadal made a minor push by winning the next two games before Fritz closed out the set.

Fritz held 5-4 and 6-5 leads in the second set but Nadal forced a tiebreaker. Nadal had a 5-4 lead in the tiebreaker before Fritz won the next three points to record the victory.

Some members of Fritz’s team were encouraging him not to play Sunday. Fritz injured an ankle during his Saturday semifinal victory over seventh-seeded Andrey Rublev and then aggravated it during his Sunday warm-up session.

“I’ve never experienced worse pain in my life before a match,” Fritz said. “We did a lot of work leading up to the match and I went through a roller coaster of emotions before the match, from thinking there was no way I could possibly play to then doing all this work on the ankle, doing so much stuff to it. I came out here and it didn’t really affect me at all.”