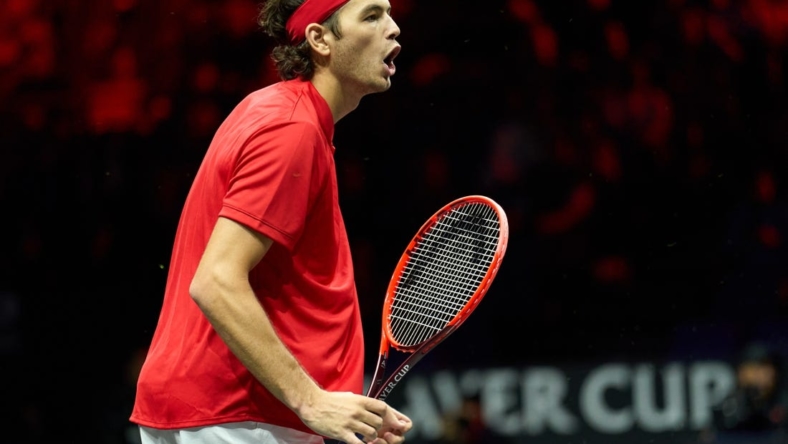 Eighth-seeded Taylor Fritz of the United States edged fifth-seeded Felix Auger-Aliassime 7-6 (4), 6-7 (5), 6-2 on Thursday to reach the semifinals of the Nitto ATP Finals in Turin, Italy.

The match was the finale of the Green Group round robin. Both players entered with 1-1 records, with the winner set to grab the second semifinal berth from the group and the loser to be eliminated.

Third-seeded Casper Rudd of Norway finished first in the group with a 2-1 mark despite losing 7-5, 7-5 to already-eliminated Rafael Nadal, the Spaniard who was the event’s top seed. Rudd wound up with a 2-1 mark, taking first player in the Green Group based on his head-to-head win over Fritz.

Nadal finished with a 1-2 record.

Fritz prevailed by winning 88 percent of his first-serve points and saving all three break points he faced.

Neither player broke serve in the first two sets, but Fritz finally pulled away by winning the last four games of the match.

“I needed to serve well the whole time; I knew that,” Fritz said. “It was frustrating throughout the match when so many points I was one away from break point. So many times at 15-30, love-30 when I was returning, I got myself in the points and kept losing the points. I just tried to stay patient and not get frustrated — and then I capitalized when I got the chances.”

Fritz said of going from being the lowest-ranked player in the field to reaching the final four: “It is huge. From possibly not even qualifying to now be in the semis feels great. I felt like I was going to play well here. I feel that I always play my best tennis against the best players.”

Nadal also took advantage of effective serving in his victory. He finished with a 16-4 edge in aces and never dropped his serve, saving two break points. Nadal had twice as many winners as Ruud recorded (38-19) and fewer unforced errors (18-16).