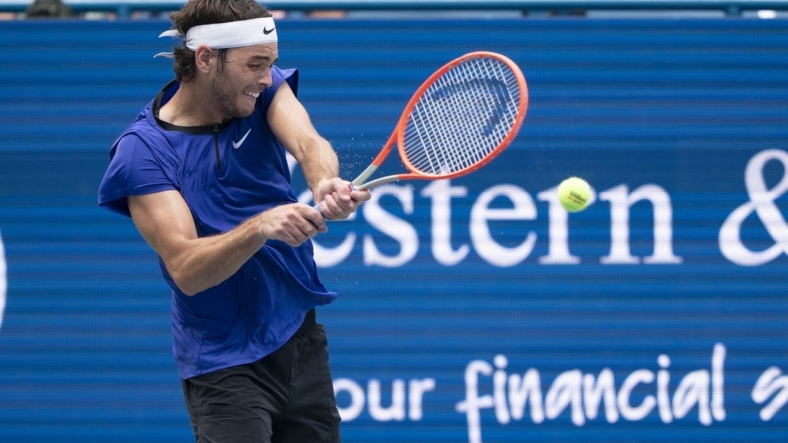 Now 24, Fritz is the best for ending the drought at this year’s U.S. Open, which begins Monday at New York.

The last American to win the U.S. Open was Andy Roddick in 2003. Andre Agassi (2005) and Roddick (2006) lost to Roger Federer in the finals and since then, no American has even played for the title.

Fritz, of course, is well aware of the situation and repeatedly is asked when the drought will end.

“We joke about the question,” Fritz told reporters. “It comes up so much.”

Fritz is the highest-seeded American in this year’s event at No. 10 and opens with fellow American Brandon Holt, a qualifier who is the son of two-time women’s U.S. Open champ Tracy Austin.

Fritz, who grew up in the San Diego area, has never advanced past the third round of the U.S. Open.

However, he had his best run in a Grand Slam event earlier this summer when he reached the quarterfinals at Wimbledon before losing to Rafael Nadal.

“How I moved through that draw is how I’d like to do, moving forward,” Fritz said of his run in England. “Any time you can kind of set a personal best, like making quarterfinals, it’s huge for the confidence.”

Fritz has won just three career ATP titles but two of them came this year. The biggest one was beating Nadal at Indian Wells in March, making him the first American to win that event since Agassi in 2001.

That win came on the hard courts, similar to the U.S. Open surface, leading Fritz to believe he can make a breakthrough. It doesn’t hurt that Novak Djokovic (unvaccinated), Roger Federer (knee) and Alexander Zverev (ankle) aren’t playing in New York.

“I haven’t done historically well this time of year in the past, but I’m also such a different player than I’ve been any other years since end of last year,” Fritz said. “My game has gone to another level, so I’m excited to go into this for the first time as a different player.”

Three other American men are seeded — No. 22 Frances Tiafoe, No. 29 Tommy Paul and No. 30 Maxime Cressy.