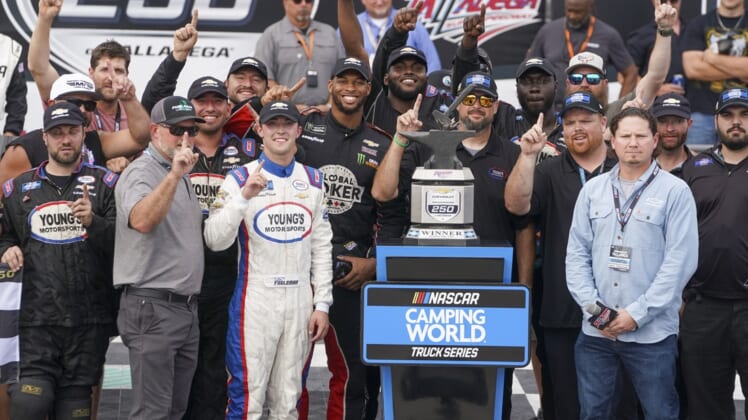 TALLADEGA, Ala. – That’s Talladega for you.

Before upset winner Tate Fogleman could go to Victory Lane, he had to visit the infield care center after sliding sideways across the finish line in tandem with runner-up Tyler Hill and slamming into the inside wall.

Fogleman claimed the win in the Chevrolet Silverado 250 after he turned then-race-leader John Hunter Nemechek sideways and passed him in the Talladega Superspeedway tri-oval as the trucks approached the stripe.

The victory was Fogleman’s first in 46 NASCAR Camping World Truck Series starts. The driver of the No. 12 Chevrolet scored his second top 10 in the series and his first on pavement, having run ninth on dirt at Knoxville Raceway.

Fogleman had never finished a superspeedway race before, but his luck turned on Saturday when he avoided two multicar wrecks earlier in the event.

“It was crazy,” said Fogleman, whose margin of victory was .052 seconds. “I missed that first big wreck, got through the second one, and it felt like things were finally starting to go right finally on a superspeedway. I’d never finished a superspeedway race before. I had a good feeling about it.

“We lined up third there (for the final restart in overtime), and I knew we just had to be aggressive… I got a push from behind, and we were able to do it.”

Todd Gilliland came home third, followed by Nemechek, who slid across the finish line in fourth. Nemechek was the only one of eight Playoff drivers to finish in the top 10 in an event that left several drivers in the postseason in must-win positions for the Oct. 30 Round of 8 elimination race at Martinsville Speedway.

“I had a run, got by the 38 (Gilliland) and was trying to keep the 12 (Fogleman) in the mirror,” Nemechek said of the final lap. “He had a huge run through the tri-oval. He faked high and I went to block high, and then the block was a little too late, I guess. I should have stayed up and probably still would have won the race.

“Solid points day for us-35 above the cut line (actually 36), I think, or something like that going into Martinsville. Just have to survive and advance to get to the final four.”

Nemechek leaves Talladega first in the Playoff standings, one point ahead of Ben Rhodes, who finished 13th on Saturday.

A gigantic wreck on Lap 58 had huge implications both for the race and for the Playoff. Chase Purdy shoved the Ford of Gilliland into the back of Austin Hill’s Toyota, and the resulting off-center contact shot Hill’s Tundra up the track, knocking Zane Smith’s Chevrolet into the outside wall.

Smith was eliminated in 33rd place and likely must win Oct. 30 at Martinsville Speedway to advance to the Championship 4.

“The last thing I remember, the 16 (Hill) was about in my windshield,” a rueful Smith said after exiting the infield care center.

All told, 21 trucks-more than half the 40-truck field-were involved in the wreck. Among them was the No. 18 Toyota of Playoff driver Chandler Smith, who managed to continue in the race despite heavy damage to his Tundra. Smith came home 19th, seven laps down.

A subsequent multi-truck accident on Lap 76 brought an early end to the race for Playoff drivers Stewart Friesen and Carson Hocevar, as well as for former Talladega winner Grant Enfinger.

Enfinger steered from the bottom lane to the top, in front of a line of trucks led by reigning series champion Sheldon Creed. When Creed moved higher on the track, Enfinger attempted to block him, and contact between the trucks ignited the seven-truck incident.

Chase Purdy spun while leading after contact from with Gilliland’s truck to bring out the sixth and final caution of the race on Lap 93 and set up the overtime. Only 20 of the 40 trucks that started the race were running at the finish.