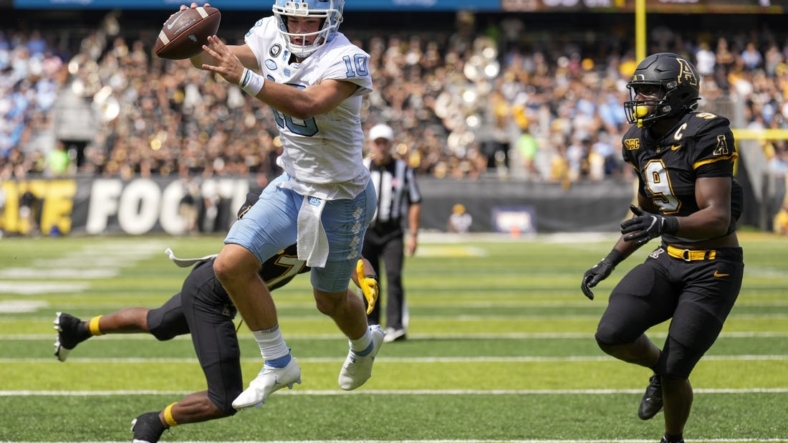 North Carolina makes a road trip into the Sun Belt Conference for the second straight week, this time going to Atlanta to play Georgia State.

The North Carolina attack is led by redshirt freshman Drake Maye, who accounted for 478 yards of offense last week as he threw for 352 yards and four touchdowns and ran for 76 yards and one score. Caleb Hood rushed for 87 yards.

North Carolina hit the scoreboard hard in its victories against Florida A&M and App State, rolling up 59.5 points a game.

Yet, the Tar Heels need to find some defense. UNC allowed 40 points in the fourth quarter against Appalachian State, coming within an overthrown two-point conversion pass of being taken to overtime. They allowed 649 total yards in that game, 288 coming on the ground.

“This is going to be a really good team,” North Carolina coach Mack Brown said. “I don’t know when — I hope sooner than later — but it’s got a lot of young guys out there. Got to play the ball better on defense and keep getting better.”

The ground game is where Georgia State excels. The Panthers have four returning starters on the offensive line who paved the way for 200 yards rushing against South Carolina. Jamyest Williams (who gained 76 yards in the opener) and Tucker Gregg accounted for 1,812 yards and 18 TDs last season.

The Panthers outgained South Carolina, 311-306, but allowed two punts blocked for touchdowns and fell for a fake punt that led to another touchdown.

“I think offensively and defensively we played those guys right to a tee if not a little bit better,” Georgia State coach Shawn Elliott said. “There were positives coming out of that contest, but winning was not one of the positives, unfortunately.”