A transfer from Oklahoma, Mordecai spent his first three college seasons on the depth chart behind Kyler Murray, Jalen Hurts and Spencer Rattler.

Mordecai, a redshirt junior, saw limited action with the Sooners. In 12 games, he completed 50 of 70 pass attempts for 639 yards, tossing four touchdowns and an interception.

He announced he was entering the transfer portal in December, and Sooners coach Lincoln Riley gave his blessing to the move.

“I think he’s been a really good member of this football team,” Riley said. “I think he’s ready to be a starter. He’s had some good competition while he was here. He had some unfortunate events that made it tougher for him to compete, like getting injured during our competition this year. But he’s a great young man, a tremendous quarterback and he’ll make somebody very happy.”

At SMU, he will replace two-year starter Shane Buechele, now with the Kansas City Chiefs. 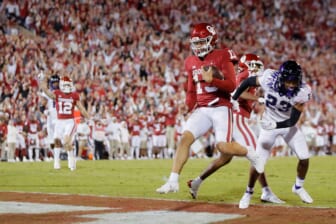 The 6-foot-3 Mordecai, who is from Waco, Texas, was a four-star prospect and the No. 11 dual-threat quarterback in the Class of 2018, per the 247Sports composite.