With the score 2-2 in the final inning, pinch hitter Brandon Lowe drew a one-out walk against Miguel Castro (0-1) and advanced to third on a single to right by Willy Adames.

After Mike Zunino walked, lefty Aaron Loup struck out pinch hitter Joey Wendle looking on a fastball. However, the left-handed-hitting Phillips stroked a breaking pitch to right on the first offering for the game-winner.

Rays starter Tyler Glasnow retired the first 14 hitters he faced before a blip that resulted in two runs on four hits for the Mets in the fifth inning.

In eight frames, Glasnow yielded the two runs on five hits and one walk while fanning 10. It was his fifth start with double-digit strikeouts this season.

Jonathan Villar swatted his second home run while Kevin Pillar was 2-for-4 with a run for the Mets, who lost for the first time since May 5 in St. Louis. 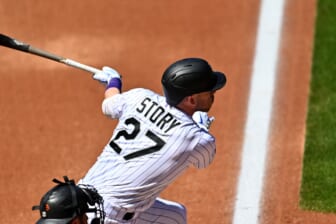 Pillar produced the Mets’ first baserunner with a two-out infield single in the fifth inning. Villar then followed by lifting an 0-1 pitch deep to right, with the ball landing in the first row to put the visitors up 2-0.

Zunino led off the eighth with his second monstrous homer of the week — a rocket into the upper deck in left — to spoil the shutout, and Kevin Padlo ripped a double to center for his first major league hit.

Three batters later against reliever Trevor May, Margot ripped a two-out double down the line in left to tie the game at 2.