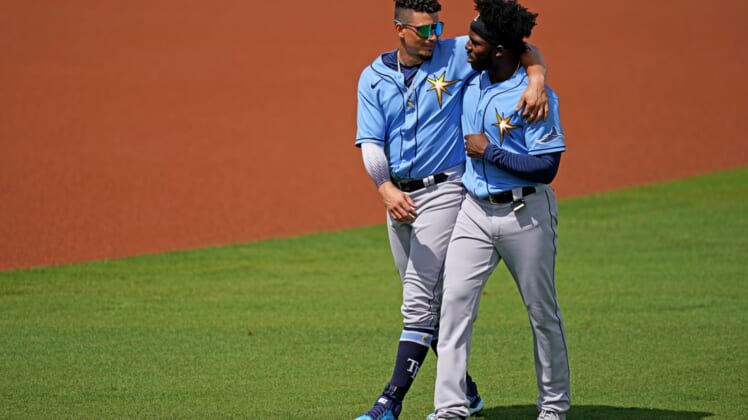 The Miami Marlins, coming off their first playoff berth in 17 years, are set to host an Opening Day matchup Thursday afternoon against their cross-state rivals, the Tampa Bay Rays, who want to be just two games better than last season.

Last year might have been an aberration, with just a 60-game season instead of the customary 162, and the Marlins snuck into the playoffs with just 31 wins.

That helps explain why not much is expected of the Marlins this year. They are generally picked last in the NL East, and Las Vegas lines have them tied for 21st in the majors in terms of 2021 odds, giving them an 80-1 chance of winning the World Series (put down $100, celebrate with $8,000 if the Marlins win it all).

Not even Marlins manager Don Mattingly seems to disagree with notion of Miami as a long-shot pick.

“We have a lot to prove,” Mattingly said. “Our division (NL East) is stacked up. I don’t think we’re going to come in overconfident.”

The Marlins on Thursday will start right-hander Sandy Alcantara, who is 11-19 with a 3.71 ERA in 53 career appearances, including 45 starts.

With a fastball that reaches 97 mph, Alcantara’s strikeout numbers (8.4 per nine innings) have been a bit disappointing, ranking him just fourth among the Marlins’ main six starters last season. Those strikeout numbers should go up as he refines his changeup.

Offensively, the player to watch is center fielder Starling Marte, who is in his first full year with the Marlins. Now 32, he was an All-Star in 2016, and won the last of his two Gold Glove awards that season. This will be a key season for Marte, who is set to become a free agent at the end of the year.

Meanwhile, Tampa Bay, coming off a World Series loss to the Dodgers in 2020, will start right-hander Tyler Glasnow in the opener. Glasnow has moved from third in the 2020 rotation to first this year, and this will be his first Marlins Park start.

He faced Miami once last year, getting a no-decision in a 5-4 Rays win. He struck out nine and allowed four hits, three walks and three runs in 5.1 innings.

Glasnow’s strikeout rate, among pitchers with at least 50 innings in 2020, was third-best in the majors at 38.2 percent. His fastball reaches the upper 90s, and his curve can be unhittable when mixed well with the hard stuff.

Offensively, the Rays are led by Brandon Lowe, who led all MLB second basemen in homers, RBIs and extra-base hits last season.

Left fielder Randy Arozarena hit seven homers in September and 10 more in October in the playoffs.

First baseman Ji-Man Choi is out due to knee surgery, but the Rays have plenty of other playmakers, including center fielder Kevin Kiermaier and shortstop Willy Adames.

Kiermaier has won three Gold Glove awards, and Adames hit four homers in his final five games of the spring, including two on Monday.

“He has swung the bat well,” Rays manager Kevin Cash said of Adames. “Maybe this is a sign of Wily starting to time up and click.”