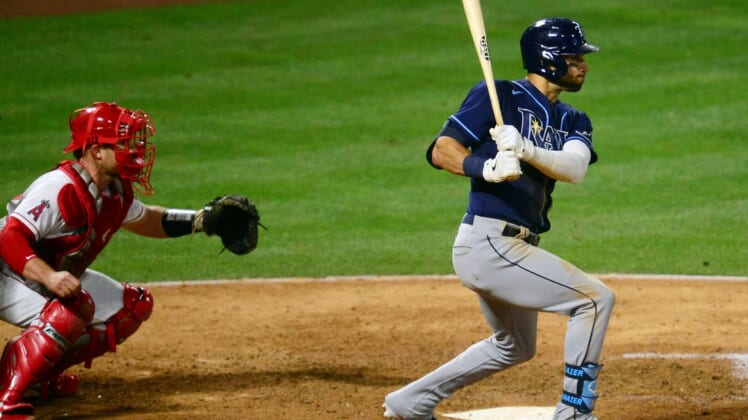 Meadows homered in consecutive innings (the seventh and eighth) off the same Angels reliever (Ben Rowen). He also drove in a run with a groundout and totaled five RBIs in the game.

The Angels scored on a Mike Trout homer, his eighth of the year, in the sixth inning and Jose Iglesias’ two-run single in the eighth.

McClanahan got the start and threw four scoreless innings, allowing just two hits and two walks while striking out five. Patino (1-0) took it from there, and went three innings, allowing the Trout homer and nothing else.

Angels starter Alex Cobb was betrayed by his defense in the first inning, after he retired the first two batters. Errors on consecutive plays by shortstop Jose Iglesias and second baseman David Fletcher resulted in an unearned run for Tampa Bay and a 1-0 lead.

Cobb kept the Rays from scoring again until the fifth, but again his defense played a role in it.

Randy Arozarena led off with a single, stole second and took third on catcher Max Stassi’s throwing error. Arozarena then scored on a groundout by Meadows for a 2-0 Tampa Bay lead.

Cobb (1-2) got through the five innings, allowing two unearned runs and two hits, but needed 99 pitches to get there and was finished.

The Angels had six hits in all, and went 1 for 6 with runners in scoring position.