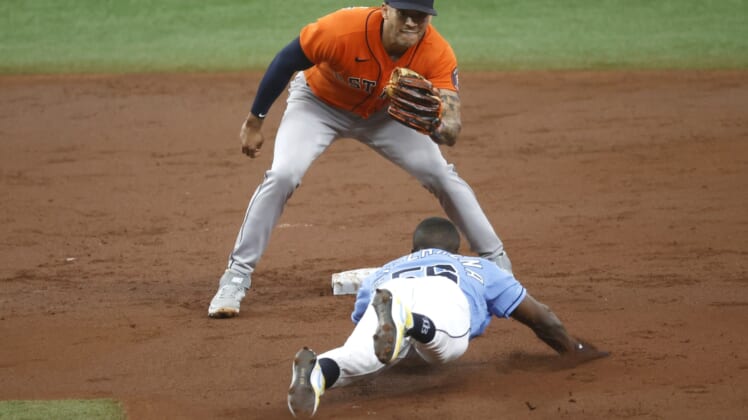 Pinch hitter Manuel Margot drove in the go-ahead run in the seventh inning Sunday afternoon as the Tampa Bay Rays avoided a sweep with a 5-4 win over the Houston Astros in St. Petersburg, Fla.

Jeffrey Springs (2-0), the Rays’ fourth pitcher, worked a scoreless inning and closer Diego Castillo struck out two in the ninth for his seventh save.

Kevin Kiermaier went 3-for-4 with a double and a run, and Meadows clubbed a three-run homer for the Rays, who broke their three-game losing streak and finished 4-6 on their 10-game homestand.

In his return from the COVID-19-related injured list, Tampa Bay starter Rich Hill permitted one hit and one walk while striking out four over three scoreless innings.

Yordan Alvarez was 2-for-4 with a homer, double and two runs and Myles Straw added two hits and an RBI for Houston, which outscored the Rays 12-3 in the first two games of the series.

Cristian Javier tossed five innings of three-run ball on four hits. The right-hander struck out four and issued two walks, but his free pass and hit batsman in the fifth led to Meadows’ tying home run.

Brooks Raley (0-1) hit Meadows with a pitch in the seventh.

With Hill out of the scoreless game after three innings and relieved by Michael Wacha, Alvarez got a 90 mph cutter up in the zone and hit it 424 feet to center field in the fourth. It was his third homer and put Houston ahead 1-0.

Houston tacked on two more against Wacha in the fifth, getting hits from Kyle Tucker and Straw, a sacrifice fly by Jose Altuve and an RBI single from Michael Brantley that barely eluded shortstop Willy Adames.

With two on in the fifth, Meadows hammered his fifth homer above the seats in right field to even the score at 3-3 — snapping Javier’s scoreless streak at 21 2/3 innings.

Houston regained the lead in the sixth on Straw’s single off Lowe’s glove to plate Alvarez, but Kiermaier scored in the bottom half when catcher Martin Maldonado dropped a throw at home for an error and an unearned run.