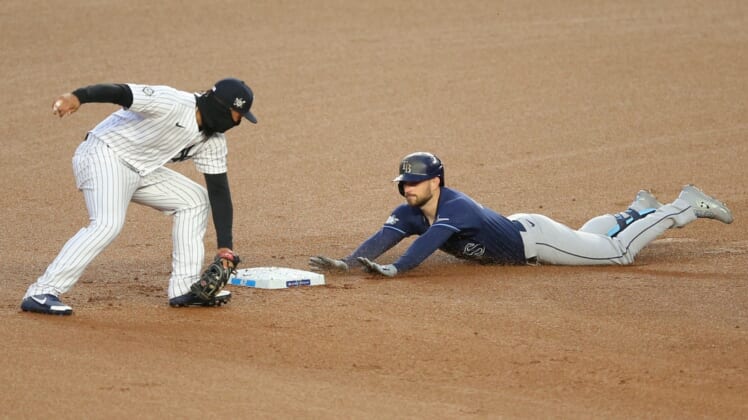 Wacha (1-1) only allowed a single to Gio Urshela in the second inning and three baserunners overall. He struck out nine, walked two and threw 60 of 93 pitches for strikes. He was at his best in the middle innings when he struck out seven in a 10-batter span during the third, fourth and fifth innings.

Thanks to Wacha’s gem and his opportunistic teammates, the Rays improved to 13-3 in their past 16 regular-season meetings with the Yankees.

Brandon Lowe hit a two-run double in the first and the Rays never looked back. They added four in the fifth by taking advantage of two errors.

After Mike Brosseau’s double down the left line made it 3-0, the Rays capitalized on miscues by Urshela at third and second baseman Rougned Odor.

Urshela booted a grounder by Willy Adames, allowing Brosseau to score and Odor made a throwing error with the bases loaded on a grounder by Randy Arozarena.

Tampa Bay added two runs with the bases loaded in the sixth on Zunino’s double when left fielder Clint Frazier was unable to make a diving catch.

Giancarlo Stanton hit a two-run homer in the seventh off Trevor Richards but the Yankees lost their third straight and fell to 2-6 in their past eight games while getting booed at various points by fans during a damp, 45-degree night.

By the bottom of the eighth, several baseballs were being thrown from the stands on the field. After a brief delay, some fans chanted “Throw It Back” when the Yankees hit foul balls in the inning.

New York’s Nick Nelson (0-1) was used as the opener and allowed two runs and two hits in a 30-pitch first. Michael King followed with three scoreless innings before the Rays scored four times in the fifth off Luis Cessa.