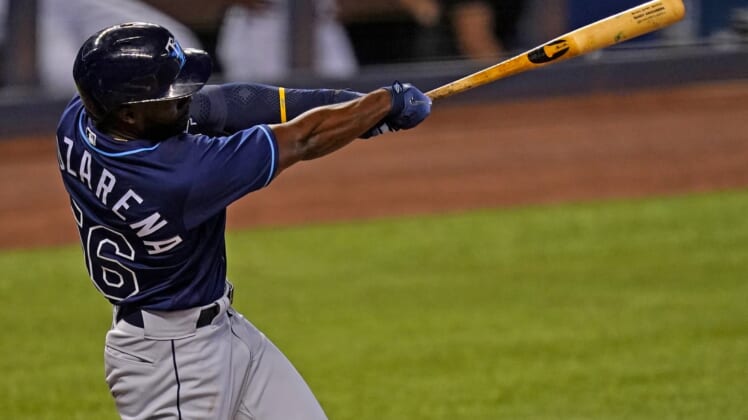 The Miami Marlins and Tampa Bay Rays hitters appear to be behind their pitching counterparts, but Randy Arozarena hopes to do his part to change that scenario on Friday.

Tampa Bay defeated host Miami 1-0 on Thursday as both teams opened their 2021 season. Austin Meadows homered, and Miami came up short on a pair of long drives to the warning track, first by Miguel Rojas and then by Jesus Aguilar.

Arozarena, who slugged 10 homers in 20 playoff games last year, went 1-for-4 with one strikeout on Thursday. He dealt with a minor injury to his left wrist this spring, but he says he feels “pretty much 100 percent” now that the season has started.

“I was very happy with the results I had last year,” Arozarena said. “But tomorrow’s a new day. That’s the only day I’m worried about now.”

Besides Arozarena, Tampa Bay’s attack features Meadows, who has a textbook lefty swing that allowed him to hit 33 homers in 2019; and Brandon Lowe, who led major league second basemen in extra-base hits last year.

The Rays hitters will face right-hander Pablo Lopez on Friday. Lopez, the only Marlins pitcher to remain in the rotation through last year’s entire 60-game schedule, worked on a new breaking pitch this spring.

Yarbrough’s specialty is that he typically induces soft contact.

Because Yarbrough is a lefty, it will be interesting to see if Marlins manager Don Mattingly subs out some of his hitters who bat from that side, including rookie second baseman Jazz Chisholm and left fielder Corey Dickerson.

Mattingly could use Jon Berti at second base and Lewis Brinson in the outfield, as both are right-handed hitters.

Chisholm, a 23-year-old native of the Bahamas, went 0-for-3 on Thursday and still has just 56 major league at-bats. But Chisholm, a shortstop by trade, has tremendous potential due to his speed and the pop in his bat.

In addition, Chisholm is a joyous player with a good deal of charisma. During the spring, when he battled Isan Diaz for the starting job at second, Chisholm sported blond hair. But for Opening Day, Chisholm showed up wearing bright blue hair.

Apparently, Chisholm was living up to a deal he had with Marlins pitcher Sandy Alcantara, who tossed six scoreless inning on Thursday. If Chisholm made the team, his hair was destined to turn Smurf blue.

Not that Mattingly minds the new look of his young second baseman.

“I like guys with personality, confidence and swagger,” Mattingly said. “As long as they prepare properly, I’m good with all that external stuff.”

As for his team as a whole, Mattingly is encouraged.

“We feel like we’re capable of beating anyone, and that’s a good thing,” Mattingly said after Miami’s Opening Day loss. “I like that belief.”