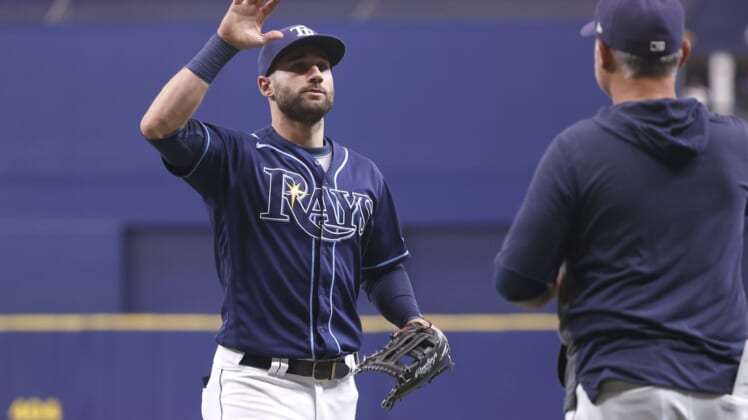 Tampa Bay Rays center fielder Kevin Kiermaier said prior to Wednesday’s game against Toronto that he is stunned by the reaction to him walking off the field with a scouting card belonging to Blue Jays catcher Alejandro Kirk on Monday night.

He probably wasn’t quite as surprised to be plunked in the back with a pitch during Wednesday’s 7-1 victory over Toronto.

The odd incident began with Kiermaier being tagged out at the plate during the sixth inning of Tampa Bay’s 6-4 home win over the Blue Jays on Monday.

As Kirk made the tag, the card fell from Kirk’s wristband and landed right next to Kiermaier. Kirk walked toward the Toronto dugout while Kiermaier looked down at the card for a second before picking it up and heading to the Rays’ dugout.

Meanwhile, Kiermaier has been the subject of criticism for his actions.

“Shocked to see what has transpired,” Kiermaier said Wednesday, adding the reaction is “just hard to believe.”

Prior to Tuesday’s game, he told Canada-based Sportsnet, “I never even looked at it, I’ll say that. But at the same time, I’m not going to drop it or hand it back.”

On Wednesday, Kiermaier insisted he did nothing wrong.

“We’re making this way too complex,” Kiermaier said. “I saw a few words on it, just knowing it wasn’t mine I didn’t look at it, still haven’t looked at it. Don’t even know what the heck is on it.

“A couple seconds after I realized it wasn’t ours and at that point, I’m not giving it back. I’m not going to walk to the other dugout or find another way. They can think whatever they want over there, they’re entitled to an opinion. I’m over it, though.”

However, the Blue Jays weren’t over it as left-hander Ryan Borucki nailed Kiermaier in the middle of the back with a 93-mph pitch in the bottom of the eighth inning.

Both benches emptied without incident but Borucki and Blue Jays pitching coach Pete Walker were ejected.

Borucki told reporters that the pitch got away from him.

“I accidentally hit him,” Borucki said. “They can think what they want over there.”

Wednesday’s game was the final regular-season matchup of the two American League East rivals. The Rays won two of three games in the final series and 11 of 19 overall.