Tampa Bay Lightning’s Mikhail Sergachev to have hearing with NHL

Tampa Bay Lightning defenseman Mikhail Sergachev will have a hearing with the NHL Department of Player Safety on Friday for his illegal check to the head of Toronto Maple Leafs forward Mitch Marner.

The maximum suspension Sergachev could receive is five games since he was not offered an in-person hearing by the league.

Sergachev was assessed a two-minute penalty for an illegal check to the head late in the first period of Tampa Bay’s 2-1 overtime loss to Toronto on Thursday. Marner, who was not injured on the play, finished two assists in the game.

“I thought Mitchy was pretty exposed, no chance to really protect himself or see it coming,” Maple Leafs captain John Tavares. “Just didn’t like it at all. Hit him right in the head.

“We want that stuff out of our game. (A suspension) certainly should at least be talked about.”

Sergachev, 23, has recorded six points (two goals, four assists) in 10 games this season. He has 142 points (31 goals, 111 assists) in 294 career games with the Canadiens and Lightning since being selected by Montreal with the ninth overall pick of the 2016 NHL Draft. 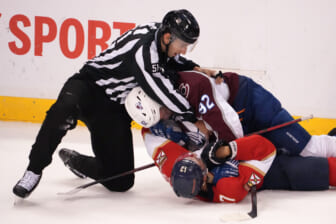