The Week 10 matchup that will send the Tampa Bay Buccaneers and Seattle Seahawks to Munich for the first time has been a ticket sales hit and is another indicator that the NFL has another strong revenue source to mine in Germany.

More than ever before, the NFL is looking to grow its brand internationally. While the league hasn’t had the same level of international success that the NBA has, there’s evidence the NFL has a solid audience abroad.

In an attempt to cultivate that growing fan base, the NFL has five regular season games in 2022 that will take place in Mexico, London, and Germany. A sizable amount compared to the days of having one or two preseason matchups in international markets.

However, it seems the work the league and various teams have put into expanding the sport beyond the United States and Canada is working in a big way. On Tuesday, Pro Football Talk reported that ticket sales for the Tampa Bay Buccaneers vs. Seattle Seahawks game on Nov. 13 in Germany have been a massive success, with millions waiting in digital line for a chance to see NFL legend Tom Brady in person.

Seats that range in price from $65 to $165 are reportedly already sold out. The outlet adds that “Stubhub is currently listing the cheapest ticket available at $585 and the most expensive at $33,760.” As the effort has progressed, tickets for international games have often done better than games domestically.

Three of the five international games in 2022 will take place in London, England. However, with Germany’s Allianz Arena selling out in rapid time the league may end up needing multiple games in Germany in coming seasons. 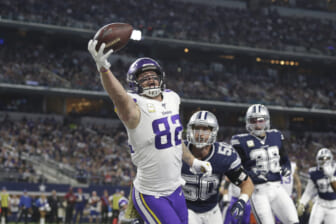 The Buccaneers and Seahawks are two of eight teams that negotiated to get exclusive rights to market the league and their brands in specific international markets. Here is the full rundown of those organizations and countries.