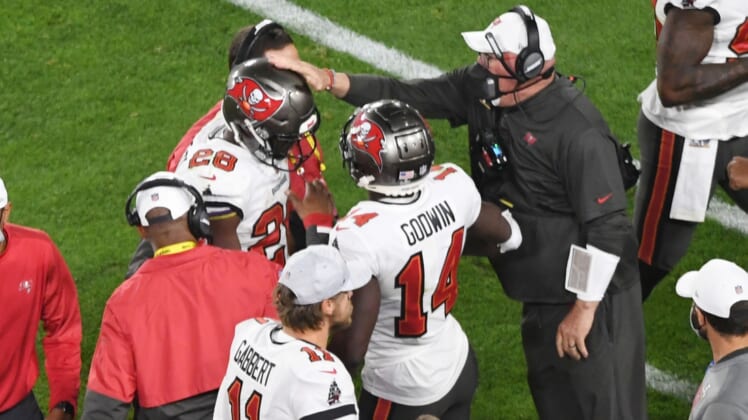 Running back Leonard Fournette put forth a postseason performance that likely won’t be soon forgotten by fans of the Tampa Bay Buccaneers.

Heck, the nickname “Playoff Lenny” entered the sports lexicon after Fournette totaled four touchdowns in four postseason games, including one in Tampa Bay’s 31-9 win over the Kansas City Chiefs in Super Bowl LV.

That sizzling run wouldn’t have come to fruition, however, had Fournette not accepted his role on the team after fellow back Ronald Jones appeared to take the lead in the backfield.

Fournette reportedly was unhappy after he was inactive for the Buccaneers’ game against the Minnesota Vikings in Week 14. Coach Bruce Arians said he had a conversation with the former first-round pick the following day, one that he now shared with the Tampa Bay Times.

“I said, ‘This is your situation. It can change at the drop of a hat,'” Arians said. “But this is your situation. Either embrace it, or you say, ‘Cut me.’ I said, ‘What do you want? Because this is a very special team that you’re part of. I think you’ve got a feeling of that. Just see if you can hang in there to see what happens.’ And he did, and I’m really proud of him.”

Prior to this conversation with Arians, Fournette had 69 rushing attempts for 271 yards and three touchdowns. The 26-year-old also had 28 receptions for 171 yards.