The Tampa Bay Buccaneers slashed nearly $8 million off their books as they work to get under the salary cap before the 2022 NFL free agency bonanza begins next week.

On Saturday, NFL Network inside Ian Rapoport broke the news that the Bucs were able to earn a good bit of salary cap relief by restructuring the contract of four-year veteran defensive tackle Vita Vea.

“The Bucs restructured the 2022 base salary of NT Vita Vea, source said, creating $7.64M worth of cap space.,” Rapoport tweeted.

Vea just signed a 4 year, $71 million dollar contract extension with the team in January. In the first year of his new deal, he was set to make a base salary of $10.6 million (via Pro Football Talk). Now a majority of that will be handed over to the 27-year-old in a lump sum signing bonus check.

During four seasons in Tampa Bay, the 2018 first-round pick has racked up 106 tackles, 11.5 sacks, and 31 quarterback hits. In 2021, the former Washington University standout earned his first trip to the NFL Pro Bowl.

The move helps the Bucs as they continue to slowly work their way towards getting under the salary cap before March 16. Several players that were key in the team earning a Super Bowl championship in 2021 will be unrestricted free agents next week. Including star tight end Rob Gronkowski, and defensive line leaders Ndamukong Suh and Jason Pierre Paul. 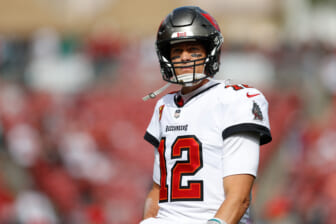 This all comes on the heels of franchise QB Tom Brady’s decision to call it a career and retire earlier this year following two seasons in Florida.