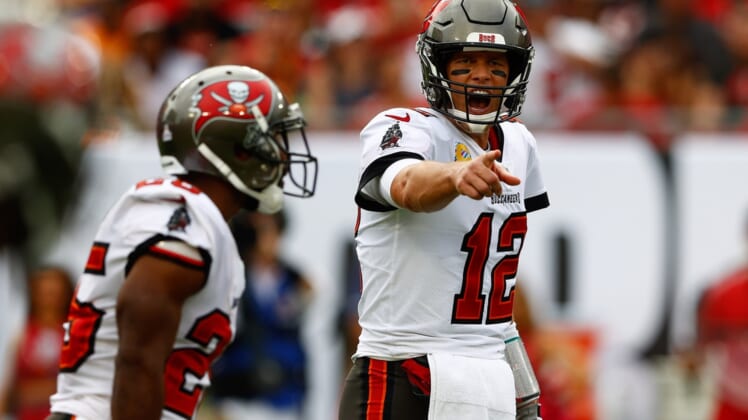 Tom Brady threw for 211 yards and four touchdowns, including the 600th of his illustrious career, and the Tampa Bay Buccaneers cruised to a 38-3 win over the visiting Chicago Bears on Sunday afternoon.

Brady became the first quarterback in NFL history to throw for 600 touchdowns when he fired a strike to Mike Evans in the final seconds of the first quarter. Evans caught two other touchdowns passes from Brady, and Chris Godwin had one touchdown reception for Tampa Bay (6-1).

Khalil Herbert had 18 carries for 100 yards for Chicago (3-4), which trailed 35-3 at halftime and never recovered. Justin Fields was under constant duress and completed 22 of 32 passes for 184 yards and three interceptions.

He was sacked four times and lost two fumbles.

Leonard Fournette added 15 carries for 81 yards and a touchdown on the ground for the Buccaneers. Tampa Bay won its fourth straight game overall and improved to 4-0 at home.

The Buccaneers wasted little time setting a dominant tone. They raced to a 21-0 lead in the first quarter thanks to a 2-yard rushing touchdown by Fournette and two passing touchdowns by Brady — a 4-yarder to Godwin and a 9-yarder to Evans that made history.

The 44-year-old Brady already was the NFL’s all-time leader in passing touchdowns and one of only four signal-callers to surpass 500 in his career. He has 21 touchdowns and three interceptions this season.

The Bears pulled within 21-3 on a 28-yard field goal by Cairo Santos midway through the second quarter.

Tampa Bay added two more touchdowns before intermission. Brady connected with Evans for a 2-yard touchdown with 3:37 left in the half, and he found Evans for a third touchdown on an 8-yard completion with nine seconds remaining.

Bears defensive lineman Bilal Nichols was ejected late in the third quarter after throwing a punch. A team official accompanied the 25-year-old as he walked slowly off the field and toward the locker room.