The Tampa Bay Buccaneers activated cornerback Richard Sherman on Friday, clearing him to play Sunday against the Buffalo Bills.

Sherman was designated to return on Wednesday.

The veteran Sherman is three-time All-Pro at cornerback. Buccaneers head coach Bruce Arians said on Monday that Sherman would begin crosstraining at safety upon his return to practice.

Sherman sustained a calf injury while warming up for a game against the Washington Football Team on Nov. 14. That day, he was set to make his fourth start since joining the team in late September.

The 33-year-old Stanford product has appeared in 142 career games (136 starts) in 10-plus seasons with the Seattle Seahawks, San Francisco 49ers and Buccaneers. He has 495 tackles, 36 interceptions, five forced fumbles and seven fumble recoveries.

On the season, Sherman has 11 tackles and one fumble recovery for four yards. 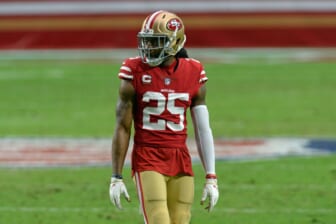 Also, safety Jordan Whitehead (calf) was ruled out Friday and will miss his second straight game.

The Buccaneers (9-3) could clinch a playoff spot — or even the NFC South division title — with a win against the Bills (7-5) and some help from other teams.