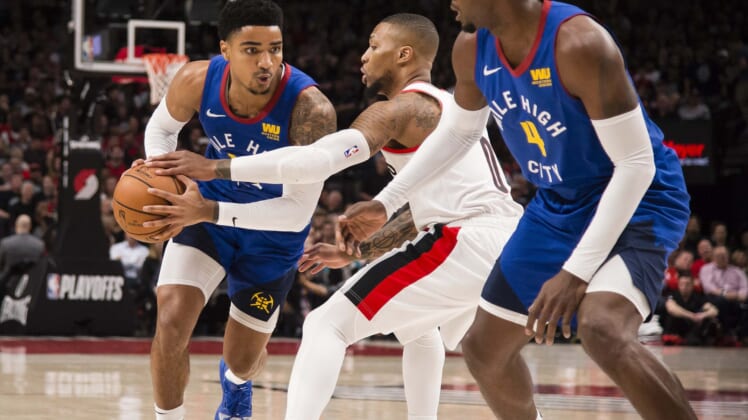 May 9, 2019; Portland, OR, USA; Denver Nuggets guard Gary Harris (14) controls the ball as Portland Trail Blazers guard Damian Lillard (0) defends in front of Nuggets forward Paul Millsap (4) during the first half in game six of the second round of the 2019 NBA Playoffs at Moda Center. Mandatory Credit: Troy Wayrynen-USA TODAY Sports

On a night when the Philadelphia 76ers found themselves in a must-win situation at home and delivered, the Portland Trail Blazers followed the same script on Thursday night against the Denver Nuggets.

The return to the Moda Center did wonders for the Trail Blazers as the energetic crowd gave this team and their star guard combo the boost they desperately needed. Even more importantly, it led to Portland’s bench stepping up in a big way.

It was a night for the stars to shine on as Damian Lillard, CJ McCollum and Nikola Jokic all dropped monster performances. While All-Stars on both sides stepped up, two unheralded role players made the ultimate difference in this Thursday clash.

Here are the top takeaways from Portland’s thrilling Game 6 win over the Nuggets on Thursday night.

In a series where Lillard and McCollum are carrying most of the weight, a mid-season acquisition stepped up huge once again for the Trail Blazers at critical times in the second and fourth quarter.

Hood showed off his dangerous scoring prowess in a single quarter that really flipped the momentum in this game. Hood’s explosive second quarter made a huge difference for Portland as he managed to outscore Denver’s starting lineup 15-to-11 on his own. He came up big once again in the fourth quarter to put the game away and capped his night off with a postseason career-high 25 points. Not bad timing for an impending free agent searching for his first big contract.

Nikola Jokic does it all in a masterful performance

When Jokic is rolling, there is nothing anyone in the NBA can do to stop him and Enes Kanter only made things easier for him. Even when his teammates didn’t deliver, including a miserable night from the bench, Jokic kept the Nuggets in the game.

He started hot out of the gate with six consecutive shots made and his contributions didn’t end there. He put his passing skills on display with five assists in the first quarter and finished the night with eight dimes. Jokic was simply sensational in this matchup, it just wasn’t enough to stop Dame Time.

It’s impossible to stop time, but even that seems more possible to do than stopping Dame Time. While Portland’s fans had to wait a little while in Game 6, the stadium started rocking when the clock hit No. 0.

Dame Time came in the third quarter as Lillard went supernova on the Nuggets with dagger after dagger from deep. He dropped 17 points in the quarter, finishing the night with 32, and injected life into the stadium to gave this team the life it needed to force a pivotal Game 7.

Michael Malone plumb out of excuses for playing Mason Plumlee

There is simply no way in getting around it and it’s frankly odd that Malone is still missing it. The biggest detriment to this team right now is Plumlee and every minute he is on the court is a minute closer this team is to being eliminated.

Anyone who watches Plumlee in this series can identify the negative contributions he brings on the court. He commits costly fouls that send Portland’s shooters to the line, he gets beat for rebounds and he brings down this team when it tries to score. It’s time for Plumlee to ride the bench or the Nuggets will have months to reflect on his poor play.

The Trail Blazers pulled off the save and forced a Game 7, now it’s time for Terry Stotts to put the right lineup on the court. While Enes Kanter is contributing on the glass, Collins is proving to be the superior player in this series.

Portland continues to be witness to Jokic’s incredible abilities and it keeps throwing one of the game’s worst defenders at him. Kanter already couldn’t hold up against a player like Jokic and while extremely admirable, observing Ramadan by not eating or drinking water during the day is hurting him even further.

Collins provides a much better presence in the paint, as his five blocks showed, and that is crucial in this series. We saw what happened when Collins took the court tonight and it needs to happen more regularly in Game 7.

Game 7 is going to be heated

If there were any positive vibes left between these two teams before Game 6, it is gone now after the fourth quarter fracas between Seth Curry and Will Barton. An on-court fracas with a poke to the eye is a recipe for fire between these two squads.

Lillard, Jokic and Jamal Murray all play with their emotions on their sleeve and Game 7 will decide who heads to the Western Conference Finals. Given neither team has made that trip in over a decade, a lot will be riding on everyone and that carries a lot of weight.

Now with the eye poke, more fuel is being added to the fire. Sunday already shaped up to be exciting and the emotional battle between these two teams will make it even greater.