We already knew which teams would be playing for the national title when Monday’s New Year’s Six bowl games began, but that didn’t diminish the four remaining games.

In fact, it could be argued the best game of this season’s bowl season happened on Monday when USC beat Penn State in the Rose bowl on a last-second field goal. Western Michigan and Wisconsin locked horns in an entertaining game early in the day, while at the same time Florida was laying waste to an overmatched Iowa squad.

Then Auburn and Oklahoma finished off the night in a game that wasn’t as competitive near the end as we’d have liked but that featured some entertaining play nonetheless.

After a full day of New Year’s Six bowl game action, the following takeaways are what stood out the most. 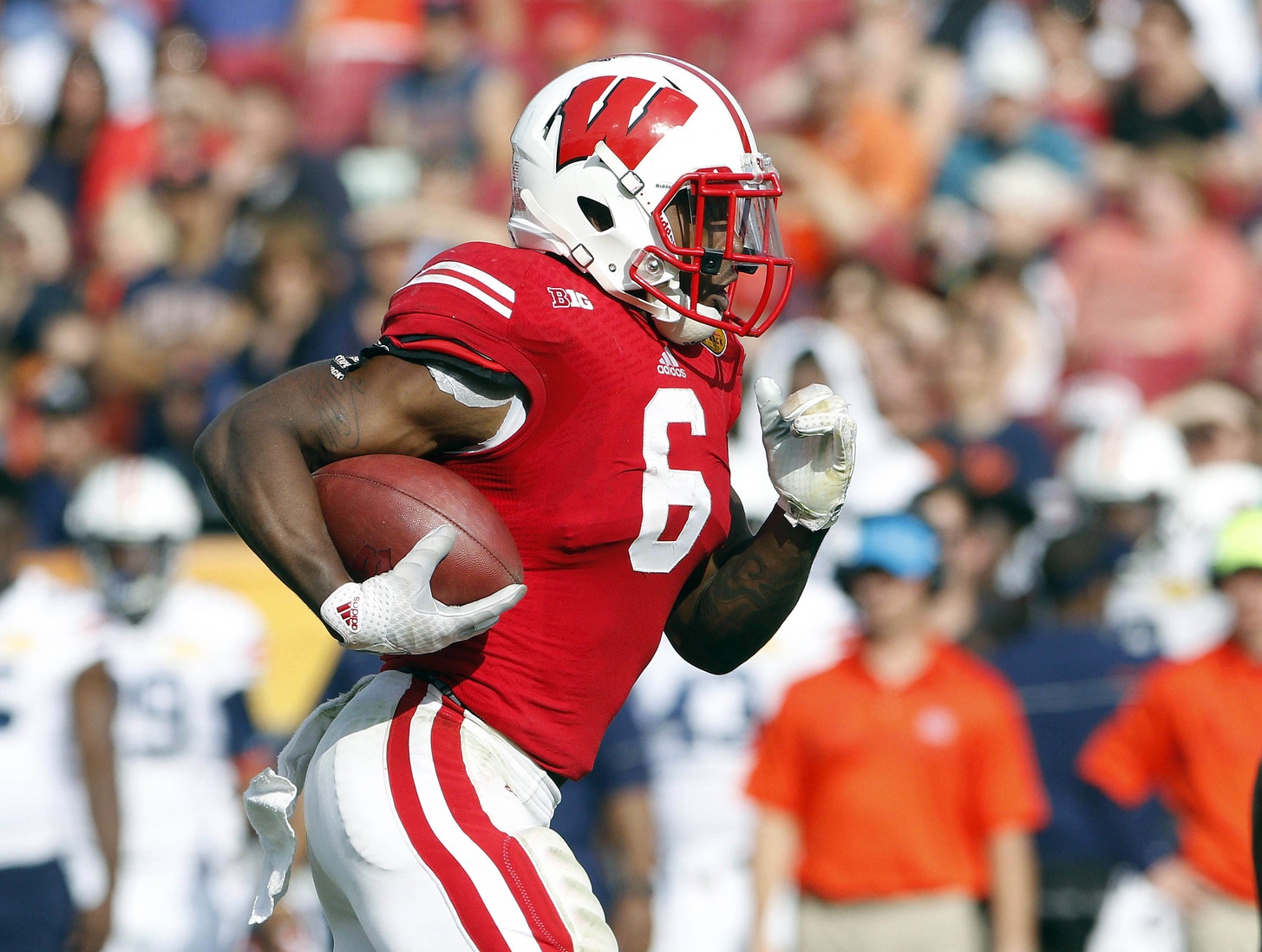 Wisconsin rushed for 104 yards in the first quarter alone, building a 14-0 lead over Western Michigan. The defensive linemen of the Broncos were significantly dwarfed by the big boys up front paving running lanes for the Badgers’ excellent running backs. As the game wore on, Western Michigan’s defensive front stiffened up but was consistently pounded as the Badgers employed their grind-it-out philosophy to perfection.

Corey Clement toted the rock 22 times for 71 yard-earned yards and a touchdown. Six other players took turns running it to the tune of 38 team carries for 184 yards and two scores.

This allowed Bart Houston and young Alex Hornibrook to have a field day on the rare opportunities they did have to throw the ball. The duo combined to complete 13-of-14 passes for 178 yards and a touchdown — a gorgeous one, at that.

The only turnover of the game was incurred by Western Michigan, when Zach Terrell was baited into a bad decision in the fourth quarter. A decision that led to the aforementioned single touchdown pass thrown by Wisconsin.

The Badgers extended their lead to 14 with this incredible catch! #OnWisconsin @BadgerFootball pic.twitter.com/zFcEiVVI1o

That the Broncos were able to make it a one-score game speaks to just how good they were this year. The 13-0 record earned coming into this game wasn’t a fluke. But unfortunately for P.J. Fleck’s crew, they just ran into a team that had the tools to end the streak.

2. Corey Davis is going to be an NFL star

One of the guys NFL draft people like Matt Miller of Bleacher Report, Daniel Jeremiah of NFL.com and others have been gushing about this season is Broncos receiver Corey Davis.

Blessed with prototypical size for a No. 1 NFL receiver (6-foot-3, 218 pounds) he has been turning heads all year. Coming into the game, Davis had racked up 91 catches for 1,427 yards and 18 touchdowns.

Though Davis didn’t have a monstrous game against Wisconsin, he did make his presence known with six catches for 73 yards. He also hauled in this ridiculous, pure-effort, want-it-more-than-you touchdown grab in the fourth quarter.

Corey Davis just decided that was going to be his ball #CottonBowl #NFLDraft https://t.co/ycPvCxLfYC

There is no doubt about Davis coming out of school — he’s a senior and will be one of the hottest names out there this winter and into the spring. We can’t wait to see what this young man does at the next level.

Iowa managed just three points Monday in the Outback Bowl. Never mind the Hawkeyes won the time of possession battle or that the defense forced two turnovers. Or that they actually had more first downs than the Gators.

Florida’s defense came up big when it mattered most, holding strong early after Austin Appleby threw interceptions on his first two drives of the game. Iowa’s three points came during that stretch, with a field goal after the second interception.

That was all she wrote, for the Hawkeyes, who’d never score again in this game. The two teams went into halftime with Florida up over Iowa by the score of 10-3 — the game should have been totally manageable for Iowa.

Unfortunately, quarterback C.J. Beathard had an absolutely miserable second half, throwing three interceptions. The first was a pick-six by Chauncey Gardner, his first of two.

Beathard’s two other interceptions turned into field goals for the Gators on their next offensive possessions.

By virtue of that touchdown scored by Gardner, the eventual MVP of the Outback Bowl, Florida’s defense outscored Iowa’s offense. And that’s all you really need to know about how this game went for the Hawkeyes.

4. Akrum Wadley is a special player 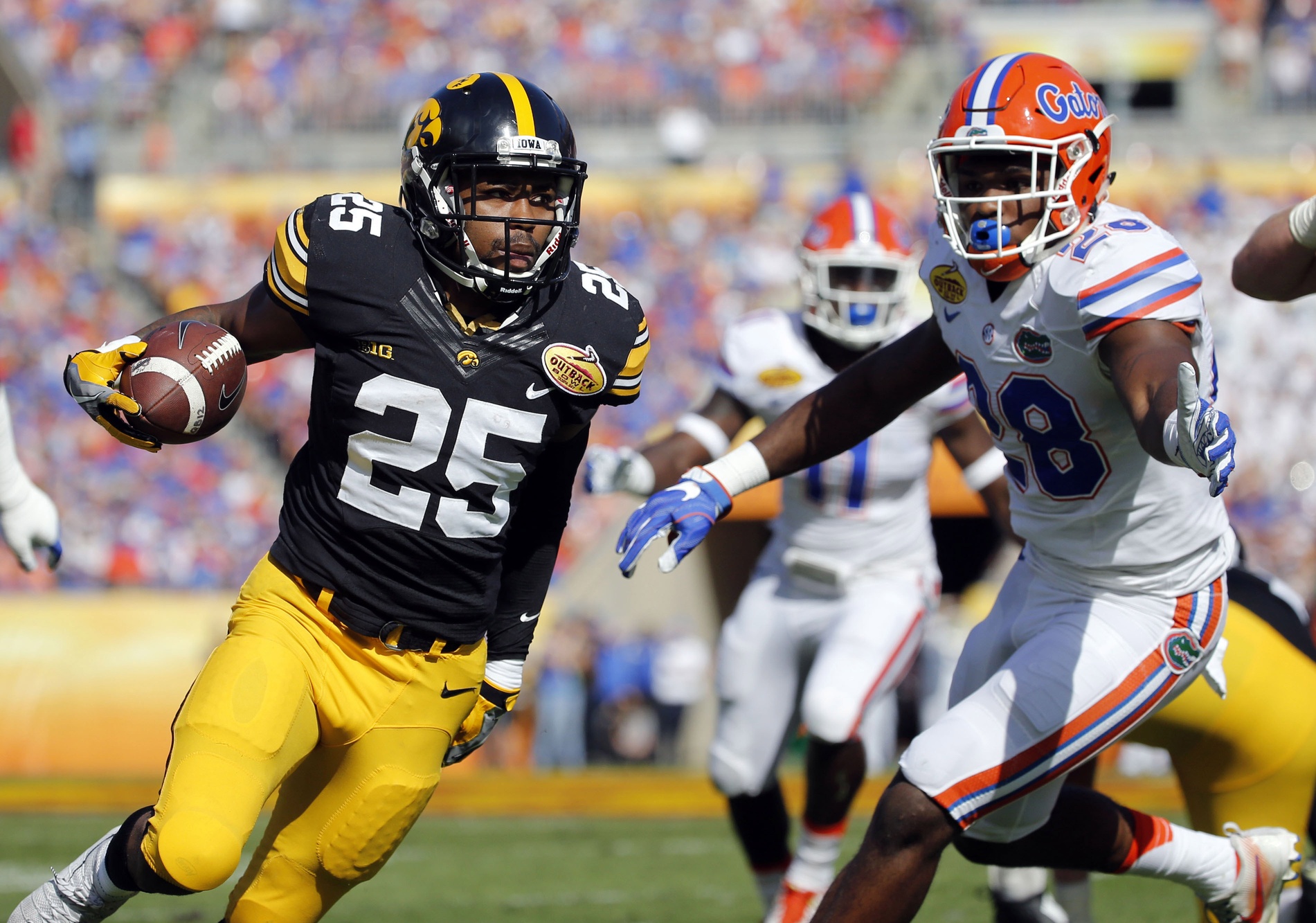 All year long, Florida maintained one of the nation’s finest run defenses, a unit not many were successful against. Yet even in a game in which the passing game was nonexistent, somehow Iowa’s Akrum Wadley managed to have a tremendous game.

Finishing with 136 total yards (115 rushing, 21 receiving) Wadley accounted for all but 90 of his team’s entire production on offense. He was pretty much the only player who consistently made plays for Iowa’s offense, and he did all that while Florida was geared up to stop him.

Watching him play, you get the feeling that he really could be something special at the next level. He’s currently on the fence about whether to stay in school for a final year or enter the 2017 NFL Draft.

This is just one man’s opinion, but it would be a smart decision for Wadley to stay at Iowa for his senior season. A bit on the slim side (5-foot-11, 191 pounds) it would behoove him to put on a few more pounds and improve his stock with a dynamite senior season.

This year’s Rose Bowl was one to remember. It’s going to go down as one of the great Rose Bowls in history after USC beat Penn State, 52-49 on a last-second field goal by Matt Boermeester.

There were so many ups and downs in this one, and the young Nittany Lions’ mistakes ultimately doomed them. Sophomore quarterback Trace McSorley threw three interceptions, which turned into XX points for the Trojans, including the final three points.

But there was plenty of positive stuff to take away from this game as Penn State looks to the future. For one, McSorley’s never-say-die demeanor, which helped him come back more than a few times this season, was the driving force that got this team back into the game in the first place after the Trojans jumped out to an early 20-7 lead.

Also, fellow sophomore Saquon Barkley had a monster game, going for 249 total yards with three touchdowns. His 79-yard score near the beginning of the third quarter was one that we’ll be watching for years to come.

This backfield duo of McSorley and Barkley will be terrorizing the B1G next year, and they have the potential to lead the Nittany Lions to a Playoff appearance — something many would argue should have been their right this year as well.

The one thing Penn State must learn to do better in 2017 is start games strong. The offense tended to start cold most games this year, which isn’t a trend that can continue going forward. 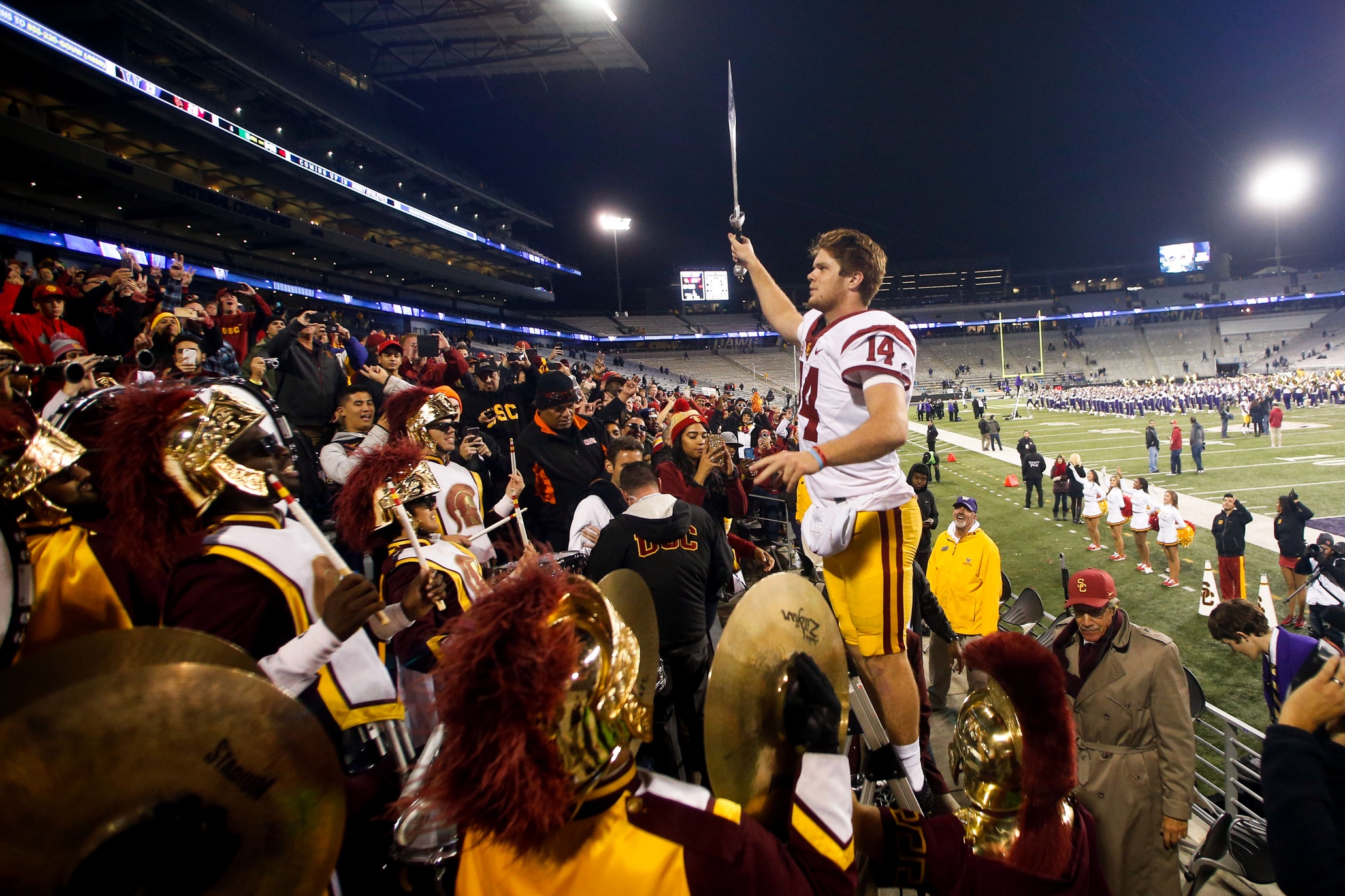 USC’s offense has truly blossomed since freshman Sam Darnold replaced Max Browne as the starting quarterback in Week 3. By that point, the Trojans were 1-2 and appeared to be headed towards another lost season. A loss against Utah on the road in Week 4 had the silver lining of a strong performance by Darnold, the first of many.

After his first start ended in a loss, Darnold led the Trojans on an eight-game winning streak heading into Monday’s Rose Bowl against Penn State. He finished the season with rock solid statistics as well, passing for 2,633 yards with 26 touchdowns and eight interceptions.

That’s darn impressive for a freshman, especially the 8-1 record.

All season long, Jake Browning has gotten national praise for what he accomplished with the Washington Huskies. And he did have a phenomenal season. But it’s important to remember Darnold actually outplayed him when USC upset Washington in the middle of November.

Everything that Darnld did during the regular season is worthy of praise. But it paled in comparison to what we witnessed Monday night. Displaying NFL-caliber arm strength, precision and poise, the 19-year-old quarterback torched the Nittany Lions for 453 yards and five touchdowns — a new Rose Bowl record.

Including this unreal display of high-level quarterbacking.

Staying perfectly balanced in the pocket, he climbs up to avoid outside pressure while going through his progressions, finding his receiver in between two safeties and delivers an absolute dime. It was Aaron Rodgers-esque, no lie.

USC is a program on the rise. And Darnold has a ton to do with that development. He’ll be there at USC for the next two years, which should scare the heck out of Pac-12 defensive coordinators.

Baker Mayfield was great Monday night. He didn’t turn the ball over, passed for 296 yards and threw two touchdown passes in Oklahoma’s 35-19 blowout victory over Auburn in the Sugar Bowl.

But Mayfield wasn’t the driving force behind the big win. Joe Mixon and Samaje Perrine both took advantage of some phenomenal run blocking and rocked their own extraordinary talents to dominate the Tigers’ defense on the ground.

Mixon was a dynamo in both the running and passing game for the Sooners, racking up 180 total yards and two rushing scores. He refused be tackled on many plays, piling up yardage after contact like his life depended on it.

Perrine wasn’t as heavily utilized, but he made the most of his opportunities, rushing for 86 yards and a touchdown to become the all-time leading rusher for the Sooners in the process.

It was a banner performance by these two running backs, and the big guys doing work in the trenches. Oklahoma’s big win saw them finish the season with just two losses and a 10-game winning streak.

8. Auburn doomed without a star quarterback

It was a very bad night to be an Auburn quarterback. Sean White was having a horrible time of it before he had to exit with a broken arm suffered on the first drive of the game.

Jeremy Johnson and John Franklin III both struggled mightily to make anything positive happen through the air, passing for 118 yards between them while failing to throw a touchdown. Worse still, the Tigers ended up giving one away when Johnson threw an interception in the fourth quarter, into the end zone, no less.

As we saw all year long, Auburn’s offense struggled to find any consistency in the passing game. White was the best passer out of the three throughout the season, but he was very conservative and didn’t give the team many opportunities for splash plays.

The Tigers managed to make headway on the ground Monday night, rushing for 185 yards and a touchdown. But without any real threat of a passing game to balance things out, Auburn’s offense was stuck in the mud.