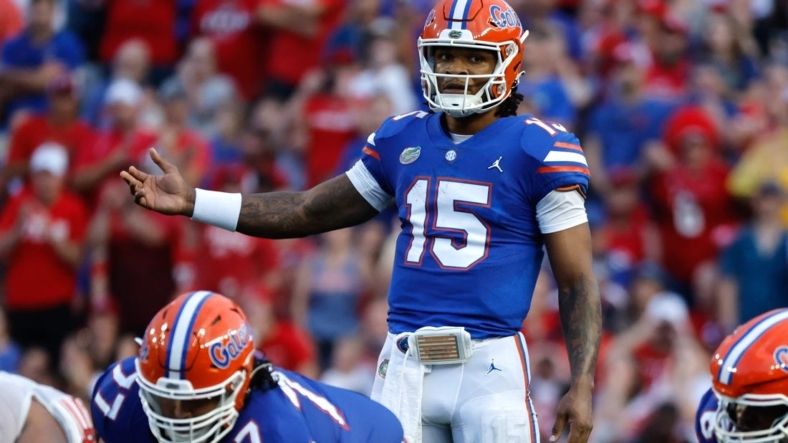 Week 2 of the college football season features all of the top 25 teams in the nation in action, with three contests pitting ranked teams against each other.

Five interesting trends sportsbooks are reporting ahead of Saturday’s jam-packed slate of games.

Top-ranked Alabama will pay a visit to former Crimson Tide offensive coordinator Steve Sarkisian’s unranked Texas team in Austin. The Tide opened as 19-point favorites at PointsBet and the line has moved to 20 with Alabama drawing 90 percent of the spread-line bets and 95 percent of the handle.

The story is similar at BetRivers, where it has been the most wagered-on game of the weekend with 11.1 percent of the total college football handle. There has been almost twice as much money wagered on Alabama vs. Texas than any other game on the Week 2 schedule, with 88 percent of the spread handle backing the Tide at -20.

It has also been the most popular game at BetMGM, where Alabama has been backed by 88 percent of the bets and 92 percent of the handle with the line shifting from 17.5 to 20.5 points by Friday.

No. 24 Tennessee travels north to play No. 17 Pittsburgh, but it’s the Volunteers who are a 4.0-point favorite at BetMGM, where they have been backed by the second-most spread bets (73 percent) and handle (73 percent) of all teams this weekend.

The spread is 5.0 points at PointsBet but that hasn’t deterred the public there, either, as Tennessee has drawn 61 and 72 percent of the spread bets and handle, respectively. The game is responsible for 5.1 percent of all the action at BetRivers, third-most at the sportsbook.

3. All Over the Aggies

Fresh off a heartbreaking defeat at home to North Carolina, Appalachian State pays a visit to No. 6 Texas A&M. The Mountaineers put up 61 points in their loss to the Tar Heels, including a whopping 40 in the fourth quarter.

The public is seeing a hangover affect for Appalachian State, with Texas A&M backed by 65 percent of the spread bets and 75 percent of the handle as a 16.5-point favorite at BetMGM.

Following an opening loss to Ohio State, Notre Dame likely has to run the table to have a shot at the College Football Playoff.

The line opened at 19 at PointsBet but shifted to 20.5 with Notre Dame drawing one-sided action, with 95 percent of the spread bets and 96 percent of the handle as of Friday evening.

Florida scored an impressive opening victory over Utah and the 12th-ranked Gators are preparing for one of the bigger games of the weekend as they play host to No. 20 Kentucky.

Anthony Richardson thrust himself into the early-season Heisman chatter with a strong effort in the win over the Utes. Florida, favored by 6.0 points, has been the third-most bet on team at BetMGM this week, with the Gators backed by 62 percent of the bets and 68 percent of the handle.

However, the spread handle has been evenly split at PointsBet, while Florida has drawn 62 percent of the total bets with the line moving from 5.5 to 6.0 points.