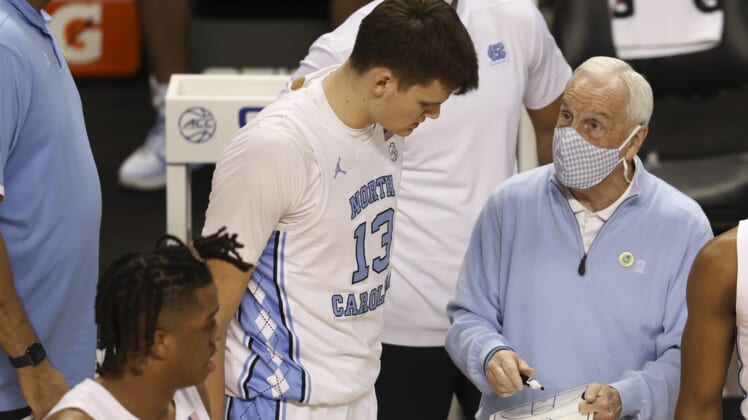 Legendary North Carolina coach Roy Williams retired from college basketball on Thursday — an announcement that seemed to catch many off guard.

He directed the Tar Heels to three national championships during his 18 years in charge at his alma mater.

Unlike his mentor, Dean Smith, Williams is retiring in what would be considered the normal cycle of spring coaching changes. Smith stepped aside just weeks before the 1997-98 season after 36 years and two national championships.

At the time of Smith’s exit, longtime assistant coach Bill Guthridge was promoted to head coach and remained in that role for three years. When he decided to step aside, he did so in June — another period outside the ideal hiring window.

Matt Doherty was next as North Carolina’s coach. His dismissal led to Williams taking the job at his alma mater, arriving from Kansas just days after his Jayhawks lost the 2003 national championship game to Syracuse.

North Carolina dropped the final two games under Williams, falling to Florida State in the Atlantic Coast Conference tournament semifinals and then to Wisconsin in the NCAA Tournament’s first round. At least the Tar Heels won the final game on Roy Williams Court, defeating rival Duke to end the regular season.

So, who’s next for the Tar Heels? Here’s a look at five potential successors to the coaching legend.

Davis is a trendy pick. At 50, he could lead his alma mater for years to come. He’s been an assistant coach for the past decade under Williams, but his lack of any experience as a head coach would seem to put him as a darkhorse at best.

But in some ways, Davis might be the top pick off the current North Carolina staff.

Steve Robinson is a longtime right-hand man for Williams. He coached at Tulsa and Florida State but had a 64-86 record with the Seminoles. It would seem unlikely that he would be considered a long-term solution. Another assistant coach, Brad Frederick, is a former North Carolina player and the son of the late Bob Frederick, who was the Kansas athletic director who hired Williams. Frederick also lacks head coaching experience.

He played for Williams at Kansas, coached under him there, and then joined him at Chapel Hill as a staff member for nine seasons.

Haase, 47, since has compiled a 162-127 record at UAB and Stanford. He’s coached the Cardinal for five seasons and has an 82-74 mark but no NCAA Tournament appearances.

Haase took his displaced Stanford team to Chapel Hill this season for workouts after the Maui Invitational, which was held in Asheville, N.C., so there’s still a strong connection there.

The two-time NBA All-Star just finished his second season as coach at Vanderbilt. He played two seasons for the Tar Heels from 1993-95 and was a consensus All-American.

Stackhouse, 46, is an in-state product from Kinston, where many top players have come from. Those ties could be valuable in recruiting and in name recognition.

Aside from being a standout player, he also has the NBA pedigree as an assistant coach. There’s just not much of a foundation for him in the college coaching ranks. The Commodores are 20-37 in his two seasons.

The UNC Greensboro coach could be considered a long shot, but Miller, 38, played for Williams and is one of the rising stars in the coaching ranks.

Miller doesn’t have experience at a high-major level, and earlier this week his younger brother, Walker Miller, announced he was leaving the Tar Heels for a graduate transfer season elsewhere. The younger Miller was a backup post player with North Carolina.

Miller has guided Greensboro to unprecedented success over 10 seasons: a 185-135 record and two NCAA Tournament appearances. The past few years, he would have seemed to be a logical candidate for other openings, but he stuck with the Spartans.

So perhaps there was a reason for that if he thought he could succeed Williams. There’s no doubt that Miller has a level of energy and enthusiasm that might translate well.

Still finishing his first season in charge of the Chicago Bulls, Donovan built his college pedigree at Florida before moving on to coach in the NBA. Should he want to transition back to the college ranks, Chapel Hill undoubtedly would be intriguing for Donovan, 55, who won two NCAA championships with the Gators.

Coaches with NBA coaching credentials tend to be popular with many recruits, so that could be a plus for Donovan. Then again, North Carolina’s national profile and history often give it a seemingly automatic edge in recruiting.

It’s hard to think outside of the Carolina family at times, so that would truly have to be the right fit.