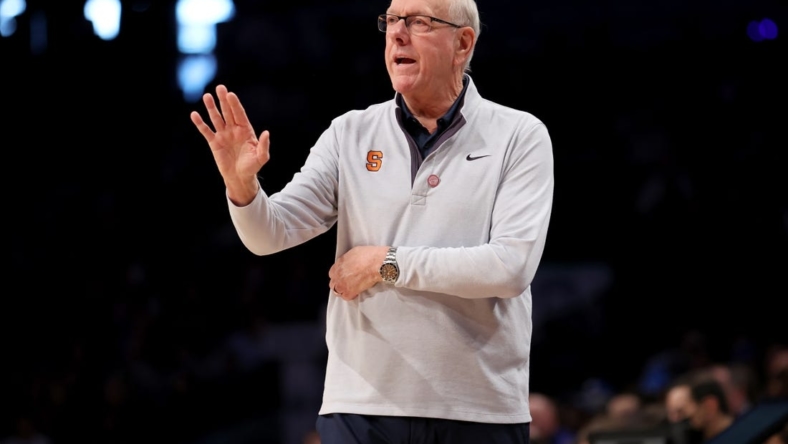 Joseph Girard III and Jesse Edwards combined for 37 points Monday as Syracuse defeated visiting Lehigh 90-72 in the season opener for both teams.

Coming off their first losing season in Jim Boeheim’s tenure on the Syracuse sideline, the Orange began the current campaign on a positive note, thanks to their two returning starters. Girard made 4-of-6 3-pointers en route to 19 points, while Edwards contributed 18 points, 11 rebounds and three blocks.

Freshman guard Judah Mintz shined with 16 points on 6-of-9 shooting in his Syracuse debut.

Evan Taylor paced Lehigh with 20 points on 4-of-5 3-point shooting, while his teammates shot just 4 of 16 from outside the arc. The Mountain Hawks missed nine of their 10 3-pointers in the opening half before keeping the score respectable with 7-of-11 3-point shooting after intermission.

The first half featured a parade to the foul line for the Orange, who made 14 of 18 free throws in the opening session and led 44-26 at intermission. Edwards led the team with 14 first-half points, while Mintz and Girard added 10 apiece.

The final tie of the contest came at 19-19 before Mintz knocked down jumpers on back-to-back possessions to ignite a 10-0 burst. The final six points in the surge came on two free throws apiece from Edwards, Mintz and Symir Torrence.

Lehigh then sliced its deficit in half with five quick points, but the Orange ended the first half by scoring 15 of the final 17 points. Torrence, Chris Bell and Girard each drained a 3-pointer during that burst as the hosts went into the locker room with considerable momentum.

The Orange still led by 24 with under five minutes to go before the Mountain Hawks got within 86-72 with 1:24 left. However, it was too little, too late for the visitors.