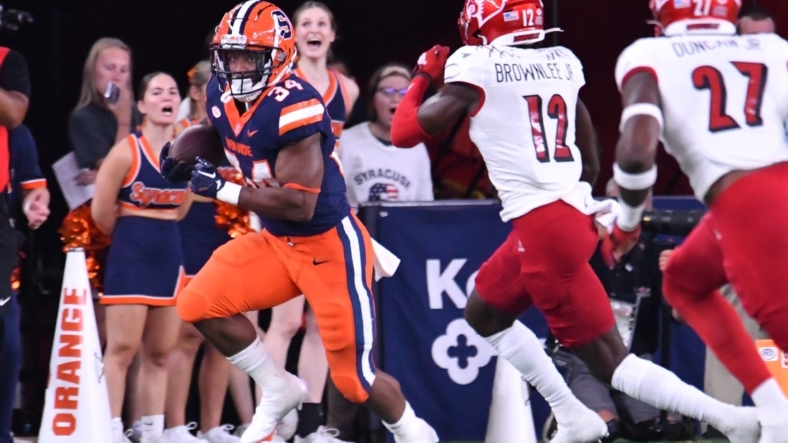 Sean Tucker scored two touchdowns and withstood an injury scare late in the first half as Syracuse never trailed and rolled to a 31-7 victory over Louisville Saturday night in the season opener for both teams.

Playing a season opener at home for the first time since 2017, Syracuse avenged last November’s 41-3 loss at Louisville by using a balanced attack.

Garrett Shrader began his first season as the full-time quarterback by completing 18 of 25 passes for 237 yards. Shrader threw for two touchdowns and also rushed for a short TD midway through the fourth to essentially seal the game.

Tucker finished with 183 total yards from scrimmage and scored twice in the first half. He finished with six receptions for 85 yards and gained 98 yards on 21 carries before hearing “Heisman” chants from the crowd when he exited in the final minutes.

Tucker caught a 55-yard TD in the first quarter and scored on a 4-yard run early in the second. After his two TDs, he appeared to get hurt with about 3 1/2 minutes remaining before halftime.

Tucker was tackled by Louisville safety Kenderick Duncan following a short gain and took a knee to his leg trying to gain more. Tucker eventually walked off under his own power and returned for the second half.

Cunningham completed 16 of 22 passes for 152 yards. He also was held to 34 rushing yards while getting sacked three times.

Tiyon Evans’ 36-yard run accounted for the Cardinals’ lone TD, while Tyler Hudson had eight receptions for 102 yards for Louisville.

After taking the lead on Andre Szmyt’s field goal with 9:46 remaining in the first, the Orange hiked their lead to 10-0 when Tucker caught a screen pass and raced down the right side with 5:01 remaining.

Louisville scored with 70 seconds left in the first when Evans scored, but Syracuse took its second 10-point lead with 10:25 remaining in the second when Tucker scored and then pulled away in the fourth when Oronde Gadsden II caught an 8-yard TD and Shrader scored from six yards out.