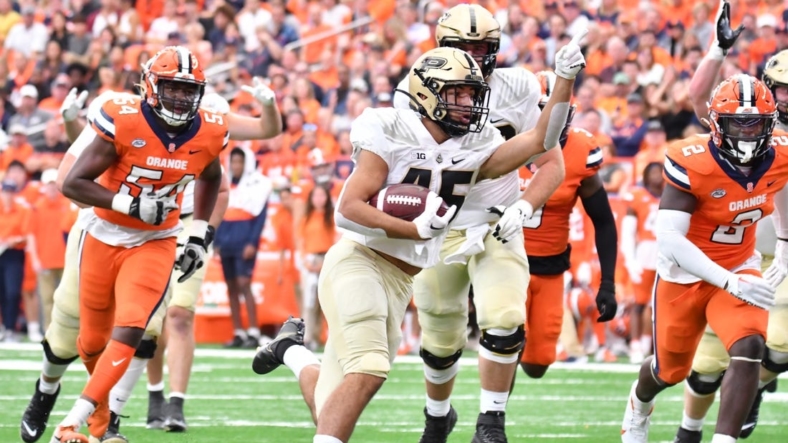 Purdue’s Aidan O’Connell found Payne Durham for a go-ahead touchdown with 51 seconds to go, but the Boilermakers (1-2) committed a 15-yard penalty on the extra point and were assessed another 15-yard penalty when their coach argued with officials, forcing them to kick off from their own 10-yard line.

That gave the ball to the Orange (3-0) at midfield with 45 seconds to play.

The Syracuse offense couldn’t muster much until a pass interference penalty gave them some much-needed momentum. On the next play, Shrader found Gadsden near the left pylon for the winning score.

Shrader went 13 of 29 for 181 yards with three touchdowns and no picks. He also led the team with 83 rushing yards. Gadsden totaled 112 yards and two touchdowns on six catches.

Trailing 9-3, the Orange finally got moving midway through the third quarter, as the hosts embarked on a 16-play, 84-yard drive that ended with Shrader’s 3-yard TD pass to Isaiah Jones on third-and-goal with 2:11 remaining in the period.

The Boilermakers responded with O’Connell’s 11-yard TD pass to Durham. That put the visitors ahead 15-10, but the ensuing two-point conversion was unsuccessful when O’Connell’s pass to a wide-open Charlie Jones hit the crossbar in the back of the end zone.

The Orange went back ahead as Shrader found a wide-open Gadsden for a 46-yard score on a fourth-and-1 play. Shrader scrambled for the two-point conversion, and Syracuse led 18-15 with 8:17 remaining.

The Orange then extended their lead to 25-15 on a 17-yard pick-six by defensive lineman Caleb Okechukwu, but the Boilermakers came right back on O’Connell’s 55-yard bomb to Charlie Jones to create a three-point margin with 6:41 to go.

Purdue had a chance to draw even with about three minutes left, but Mitchell Fineran’s 41-yard field goal sliced to the right. However, the Boilermakers went back in front on their next possession, setting up the wild finish.