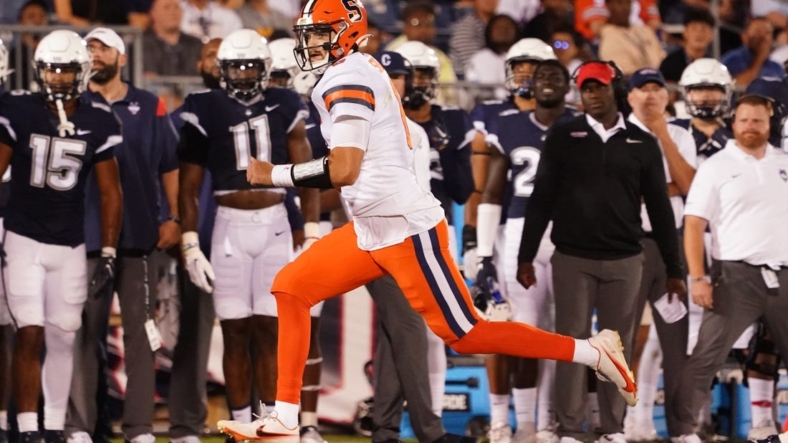 Garrett Schrader threw three touchdowns and ran for two more to lead Syracuse to a 48-14 victory over host UConn on Saturday in East Hartford, Conn.

Sean Tucker ran for a game-high 112 yards on 27 carries and a score. He also had four receptions for 17 yards for the Orange (2-0), while Oronde Gadsden II had three catches for 45 yards.

Leading 20-7 midway through the second quarter, the Orange put the game away when Schrader threw an 18-yard touchdown pass to Courtney Jackson with 19 seconds left in the half.

The Orange’s defense set up Syracuse’s next score. After Marlowe Wax strip-sacked Zion Turner and recovered the fumble at UConn’s 30, Tucker scored on a two-yard run six plays later to push the lead to 34-7 with 9:30 left in the third quarter.

After Zion Turner’s 56-yard touchdown pass to Aaron Turner pulled UConn to within 34-14, Schrader answered with a seven-yard scoring run to make it 41-14 with 2:29 left in the third quarter.

Syracuse took a 7-0 lead less than five minutes into the game on Schrader’s 1-yard touchdown run before Andre Szmyt’s 27-yard field goal increased the advantage with 4:26 left in the opening quarter.

The Orange capped their 17-point first-quarter outburst with Schrader’s 47-yard scoring strike to Damien Alford just over a minute later.

UConn responded in the second quarter when Devontae Houston’s 28-yard touchdown run capped a nine-play, 79-yard drive with 11:45 left in the half.